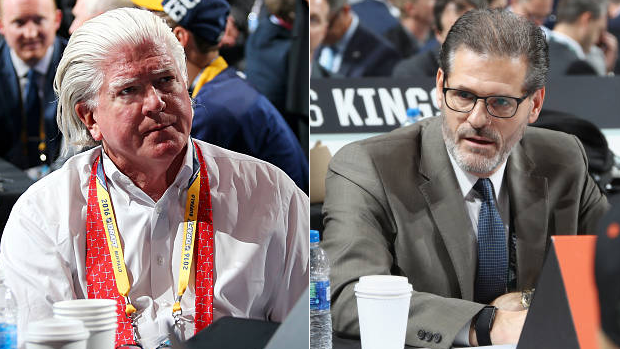 Up ’til now, the view of Ron Hextall from the other side of the Keystone State included only a dyed-in-the-wool Broad Street Bully with a flying-P Flyers logo tattooed on his back.

But the truth is: the Pittsburgh Penguins were actually Hextall’s first hockey love.

Hextall, now 56, spent the formative years of his childhood in the Steel City while his father, Bryan, made his way in the Hextall family business playing for the Penguins in the early 1970s. His neighbours in Green Tree, Pa., were Penguins and Pirates players.

That’s where Hextall played street hockey with Pirates stars Manny Sanguillen and Rennie Stennett – the same streets where then-Penguins netminder Jim Rutherford encouraged a five-year-old Hextall, the son and grandson of two NHL forwards, to pick up the pads.

“He was very good to me,” Hextall said of Rutherford. “He gave me his mask, his skates, he played road hockey with me. He was my biggest idol.”

A 71-year-old Rutherford, on his way out the door on Jan. 27 as Penguins general manager after hanging two Stanley Cup banners in the City of Bridges, recommended Hextall as his successor.

The Penguins got their man on Tuesday.

Well, actually they got two of them.

The Penguins hired Hextall as the 11th GM in franchise history and created a new position for former Maple Leafs, Canucks and Flames GM Brian Burke to serve as Pittsburgh’s president of hockey operations.

According to the Penguins, Hextall will oversee the team’s day-to-day hockey operations, reporting to Burke as his primary adviser. Burke will report to David Morehouse, the team’s president and CEO. Penguins co-owners Mario Lemieux and Ron Burkle were heavily involved in the interview process.

The Penguins will retain assistant GM Patrik Allvin in his same role; sources say Hextall is expected to bring Nashville Predators scout Chris Pryor, his former assistant in Philadelphia, along as an assistant GM in Pittsburgh.

Morehouse said it wasn’t the new “structure” of the organization that mattered, so much as “the people.” According to sources, the Penguins also interviewed and strongly considered NHL Network analyst Kevin Weekes for a role similar to the one Burke landed.

“This has nothing to do with anything other than talent. Once [Burke] was interested, this was a no-brainer,” Morehouse said. “Ron Hextall was the guy we all wanted. We’re going to harness that competitive fire. Mario is as excited as anyone, having [Hextall] on our side of the ice is much better.”

The challenge assigned to Hextall in Pittsburgh, to find the final pieces for another Cup run with an aging core of superstars in Sidney Crosby, Evgeni Malkin and Kris Letang, is much different than the one he undertook in Philadelphia.

In Philadelphia, it was all about patience, drafting and development – a definite departure from the Flyers’ norm that Hextall convinced late owner Ed Snider was required. But Hextall was quick to point out that the Flyers qualified for the playoffs in two of his four years as GM.

The Flyers’ success with homegrown talent, reaching Game 7 of the second round last fall, after Hextall was fired in 2018 only seemed to validate his vision.

“I know I’m kind of looked at as a builder,” Hextall said. “This situation is different than the one we took over in L.A. or in Philadelphia. I’m not a one-trick pony. I’ll work with [Burke] to, again, become the best team that we can become today.”

But the mandate from the Penguins is “win now,” as echoed by Morehouse on Tuesday: “We’re the Pittsburgh Penguins and we’re here to win.” Walking that tight rope between present and future was said to be his undoing in philosophical difference in Philadelphia.

That will be Hextall's delicate dance in Pittsburgh, too, as there is a cliff not too far in the distant future waiting for the Penguins (and now his own tenure) by virtue of that “win now” approach that Rutherford employed.

On Tuesday, Hextall did not bite when asked about the long-term futures of Crosby and Co. in Pittsburgh.

“I can’t tell you what’s coming our way. I can’t,” Hextall said. “I can’t tell you how good our team is going to be the rest of the year and therefore I can’t be definitive in a direction. In my interviews, we talked about all kinds of different scenarios and we went through them all – certainly not things I’m open to discuss right now because they were internal discussions.

“We will keep an eye on the future here, certainly try and grab some assets here and there, but we’ve also got to put the best team … we’ve got Crosby and Letang and Malkin, we want to be the best team we can be right now with three of the best players in the world.”

Burke, 65, spent parts of the last three years in media after departing the Calgary Flames as president of hockey operations in 2018. Burke was previously critical of the Penguins’ franchise, saying that their plan was predicated on the fact they “won a god damn lottery.”

“If you remember back in the lottery in [2005], I just missed Sidney Crosby,” said Burke, whose Anaheim Ducks won the No. 2 overall pick instead. “Well, now I’ve got Sidney Crosby.”

Two months ago on a podcast, Burke said: “I don’t think Pittsburgh is good enough to win. Now matter what they do now with their cap situation, I think that window has closed, for me.”

Asked about that assessment on Tuesday, Burke said he was “not going to back away from anything I said in my media role, but I also think when you have pieces like we have here, you’ve got to try to win.”

“All the teams that have had success have cap issues. There’s a whole bunch of teams with extreme salary cap issues that haven’t won a bloody thing,” Burke said. “At least when Jimmy Rutherford goes to buy gas, he’s got two rings on.”

The heat is on for Hextall as he comes home to Pittsburgh. Each of the last three general managers the Penguins hired went on to win a Stanley Cup within their first three years on the job.