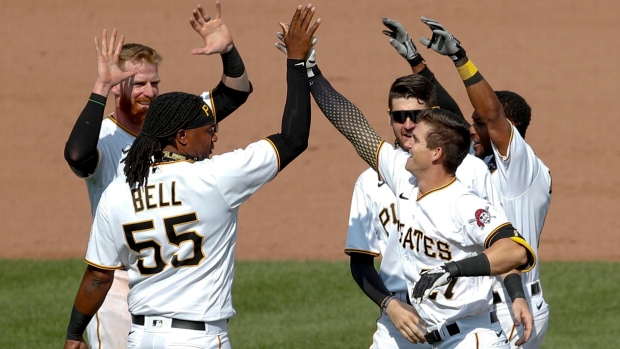 PITTSBURGH — Derek Shelton has said all the right things during the Pittsburgh Pirates' bumpy start, one marred by injuries that have ravaged the pitching staff and an offence that entered Thursday as the worst in the National League.

The first-year manager praised his players' attitudes. He pointed to their production late in games they were losing as proof they were mentally engaged. He stressed the importance of patience, even in a truncated season.

It finally — if perhaps only fleetingly — paid off against the hottest team in baseball.

Kevin Newman's two-run pinch-single with one out in the ninth inning lifted the Pirates to a 6-5 victory over the Minnesota Twins on Thursday. The victory snapped a seven-game losing streak. Hours after Major League Baseball implemented more stringent social distancing guidelines, Newman and his teammates briefly eschewed them in celebration.

“Kind of a huge bit of relief for myself and the team to be able to come through when we really need one,” Newman said after his fifth career walk-off hit. “It’s a great feeling to come back. Hopefully, this is the start of something a little different than what we’ve had lately.”

Shelton's first two weeks on the job have been a mishmash of pitchers exiting in pain and hitters unable to generate any momentum in the batter’s box. Still, Shelton saw signs of hope. Pittsburgh's three-run outburst against Minnesota closer Taylor Rogers (1-1) gave them 14 runs in the ninth inning this season. The Pirates have scored 62% of their runs this season in the seventh inning or later.

“I said at the beginning, we’ve continued to play hard and come up short,” Shelton said. “You continue to grind. But to come out on the winning end of a game like that, against a team like that, it feels a lot better to smile.”

Colin Moran started off the ninth with a flare to left field off Rogers. Tucker came on to pinch run and raced to third on a double by Reynolds. The Pirates, who came into the game hitting a National League-worst .186 as a team, won for just the third time in 13 games when Newman raced one out of reach of a drawn-in infield.

Twins manager Rocco Baldelli defended Taylor and a bullpen that entered the day with the most saves in the majors.

“I don’t think it was a whole lot about execution," Baldelli said. "It wasn’t like balls were getting whacked all around. He made pretty good pitches, things just happen sometimes in this game and there’s not a lot we can do about it.”

Miguel Sano hit a three-run home run and Byron Buxton and Eddie Rosario also went deep for the Twins, who saw their six-game winning streak snapped. Minnesota missed a chance to put together the best start in franchise history, falling to 10-3, a start matched by the club five previous times, the last in 2001.

Minnesota starter Kenta Maeda surrendered Gregory Polanco's first home run in 14 months in the third inning — a 446-foot shot that bounced into the Allegheny River — but little else over six innings of work. Maeda struck out four and walked three while retiring 15 of the final 16 batters he faced. He exited with a two-run lead before things slipped away late following an uncharacteristically sloppy performance by the Twins' bullpen.

The Pirates drew within a run in the eighth when veteran centre fielder Jarrod Dyson singled leading off the inning. The 35-year-old promptly stole second and third before coming home on a routine grounder by Phil Evans.

“To get us closer is huge,” Newman said. “It definitely sparked us. It just puts us that much closer and within reach.”

Twins: P Jake Odorizzi is scheduled to make his first start of the season on Saturday against the Royals. Odorizzi, an All-Star in 2019, missed the first two weeks due to a right intercostal strain.

Twins: Rookie Devin Smeltzer (1-0, 11.57 ERA) gets the nod on Friday when Minnesota begins a three-game series at Kansas City.

Pirates: Chad Kuhl will make his first start since June 26, 2018 when the Pirates open a three-game series with Detroit on Friday. Kuhl underwent Tommy John surgery in September 2018.