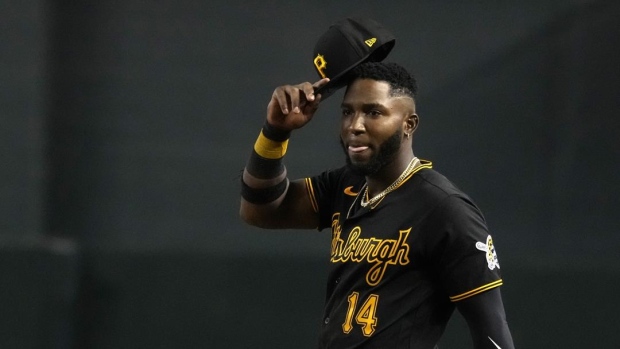 Having his phone on him during a game proved costly for Rodolfo Castro.

Major League Baseball has suspended the Pittsburgh Pirates infielder for one game and fined him for violating league policy. The team has announced that Castro will appealing, allowing him to continue to play during the appeal process.

Pirates infielder Rodolfo Castro was suspended for one game and fined for violating MLB policy when he played while having a cell phone in his back pocket.

Castro, 23, walked in the fourth inning during last Tuesday's game against the Arizona Diamondbacks. On a single from Oneil Cruz, Castro advanced to third base and had his phone fall out of his pants while sliding into the bag.

Major League Baseball does not permit electronic devices on the field or in the dugout.

Through an interpreter, Castro said that he completely forgot it was there.

"I don't think there's any professional ballplayer that would ever go out there with any intentions of taking a cell phone," Castro said after the game. "It's horrible it happened to me. Obviously, it was very unintentional."

A native of Los Llanos, Dominican Republic, Castro is in his second big-league season. In 27 games this season, Castro is batting .239 with two home runs, five runs batted in and an OPS of .702