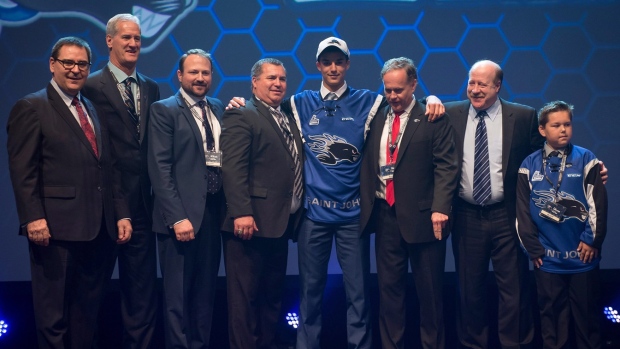 Plaintiff lawyer Ted Charney said in an interview Wednesday that he has obtained through discovery a copy of a Quebec Major Junior Hockey League standard player contract from before the 2013 season.

The undated contract was provided to the plaintiffs on Aug. 25 after a Montreal judge ordered the QMJHL to provide copies of all standard player contracts from 2008 to 2013. The contract states that players are employees of their team who receive salaries.

Under the heading, “Employment and duties of player,” the contract says “the player agrees to provide his services and to play hockey, to the best of his abilities, in all games, under the supervision and control of the club...”

The description of a player as an employee is critical to the case because the CHL claims its players are amateur student athletes and teams are exempt from minimum-wage legislation. Several provinces and U.S. states have agreed with the CHL’s assessment.

The two-page contract also details how a player might suffer “loss of salary during a suspension by the club or by the league.” The contract says players should receive their salaries on a weekly basis.

“In the case of a suspension, at the option of the club, the salary of the player shall cease to be paid during said period of the suspension,” the contract says.

There are minimum-wage lawsuits proceeding in Montreal against the QMJHL, in Toronto against the Ontario Hockey League, and in Calgary against the Western Hockey League.
Charney said he plans to file the player agreement in court as evidence in all of the cases.

“There can now be no question that for many years the QMJHL legally classified major junior hockey players as employees while failing to pay minimum wage in direct violation of Quebec labour laws,” Charney said in an interview.

“Throughout the course of this litigation the commissioners of the QMJHL, the OHL, the WHL and the CHL have repeatedly denied that major junior hockey players are employees...,” Charney said. “These statements were made in circumstances where the commissioners must have known that [the QMJHL] approved a standard player agreement where until 2013 players are characterized as employees.”

According to Charney, after class-action lawsuits were filed in 2014 against the CHL and its leagues, all three leagues cancelled existing standard player agreements and replaced them with new agreements where players are described as being amateur athletes. Before player contracts were changed in 2014, the OHL and WHL described players as independent contractors.

“It is not our practice to litigate the class action lawsuit through the media, nor to speculate on evidence not yet filed with the courts,” Branch wrote in an emailed statement.

“As you know, we believe the players are not employees but amateur athletes and that the player experience and benefits offered by our league and teams, which were developed with the input of players and hockey families, far exceed the employment standards benefits sought in the claim.”

Class actions in Alberta and Ontario against the WHL and the OHL have been certified, while a certification hearing for the Quebec class action is expected to take place this fall.

Lawyers for the plaintiffs have said 593 current and former CHL players, who may become members of the class action if it is certified, have registered with their law firm after it established a social media campaign to build awareness.