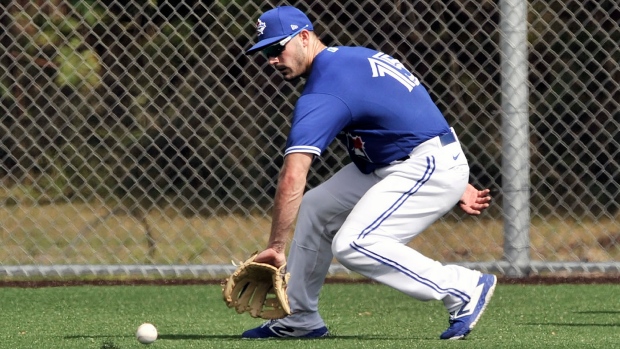 DUNEDIN, Fla. — As spring training gets underway in earnest this week with Toronto Blue Jays position players taking the field as a complete group for the first time Monday, the competition for roster spots will start to take shape.

There are two types of battles: Players trying to make the team and find their way to Toronto for opening day, and internal competition for certain roles, positions or playing time.

Manager Charlie Montoyo has a handful of intriguing decisions to make, especially with the addition of the 26th roster spot giving teams the ability to be a bit creative with how they shape their rosters for the start of the season.

One position already has some clarity, as GM Ross Atkins fingered Randal Grichuk as the likely opening day centre fielder.

Grichuk took that one step further Monday, indicating the Jays have told the 28-year-old that he’ll be the everyday guy in the middle of the outfield.

“I don’t really know what’s going on behind the scenes, but they’ve told me to prepare to be in centre this year,” Grichuk said.

That move could’ve happened last year when Kevin Pillar was traded five games into the season, but the Jays were reluctant to shift Grichuk on a full-time basis, instead curiously deciding to move Teoscar Hernandez to the 8-spot for much of the season.

In the end, Grichuk ended up starting 56 games in centre to Hernandez’s 72.

Defensive Runs Saved did not like Hernandez’s work, giving him a minus-7 mark.

Statcast’s Outs Above Average numbers graded them similarly, with Grichuk at plus-6 in right field last year and Hernandez at minus-5 in centre.

With the benefit of a full spring training, the shift could be permanent this time around.

“As of right now, I plan on getting reps (in centre) in BP,” Grichuk said of what he’ll do this spring to ease the transition. “I’ll be playing in games in spring, as of now that I know of, in centre. I think all that will make me feel a little bit more comfortable. Obviously, last year, I kind of got thrown in with the fire so to speak in centre. I’m comfortable out there, but with more reps you’re going to be better and pull out your best.”

Now that centre field seems to be Grichuk’s, the cast of characters that were looking to stake claim to that spot will shift their focus to his vacated right field spot.

Here are five job battles to pay attention to this spring:

With Lourdes Gurriel Jr. locked into left and Grichuk seeing most of his time in centre, there are five other outfielders on the 40-man roster who are trying to find a role.

The Jays will find at-bats for Hernandez after he crushed the baseball in the second half of the season, but the DH spot will factor in, as well.

The other four names are all trying to just make the team.

Derek Fisher, acquired from the Houston Astros in the deadline deal that sent Aaron Sanchez and Joe Biagini the other way, is out of options and has enough physical tools that he might not make it through waivers.

Former top prospect Anthony Alford is in the same position.

On the other hand, Billy McKinney and Jonathan Davis can both be optioned to Triple-A Buffalo to start the season without being exposed to waivers, which won’t help their cases in late March.

A new wrinkle this season, it will be interesting to watch teams make use of an extra body.

With pitching staffs capped at 13 arms — the Jays have been running eight-man bullpens for much of the past couple of seasons and you can expect that to continue — Montoyo will be working with a four-man bench on a daily basis.

One of them will be either Danny Jansen or Reese McGuire on any given day, but the rest of the configuration is up in the air.

Most contending teams could look to add some sport of specialist, be it either a speed guy who can pinch run or a defensive replacement to complement a glove-deficient starter.

Some teams may choose to use it to keep a guy like Alford, who is out of options but not quite yet out of chances.

There’s a very good chance five outfielders — Gurriel, Grichuk, Fisher, Hernandez and Alford — will make the opening day configuration, but it might not stay that way the entire year.

If Hernandez is seen as the everyday right fielder, that could open a door for first baseman Rowdy Tellez to make the club as a DH option.

There’s a group of three players vying for one or two spots, depending how Montoyo decides to value Tellez’s power, as well as the out-of-options Fisher and Alford.

Brandon Drury was tendered back in December when some thought he could be cut lose. They kept him with the idea of giving him a chance to improve upon a dismal 2019 season because they like the tools, but there’s no guarantee he’ll be on the roster, especially with an option remaining and third base at-bats in Triple-A Buffalo readily available.

Drury will have to fend off six-year veteran Joe Panik, who the Jays brought in on a minor-league deal, a la Eric Sogard a year ago.

Panik is coming off two straight down years, but he does have a career .271 batting average and three seasons of a wRC+ over the league average of 100.

Defensively, his natural position is second base, but the 29-year-old has been reminding everyone since reporting to Jays camp that he was a shortstop in the minors, despite not having playing the position as a major leaguer.

He has a good chance to make the club and play all four infield spots.

Ruben Tejada is another veteran in camp on a minor-league deal, and his extensive shortstop experience is something the Jays like. He’s a longshot at this point.

Santiago Espinal, acquired from the Boston Red Sox for Steve Pearce and added to the 40-man roster this winter, is the only prospect worth monitoring, but he will need to have a huge spring in order to push his way into the picture.

The top four are set: Lefty Hyun-Jin Ryu will take the ball opening day, followed by right-handers Tanner Roark, Matt Shoemaker and Chase Anderson, not necessarily in that order.

It would take an injury for one of them to not be on the opening day roster. All four could pitch poorly and still break camp in the rotation.

The fifth spot, however, is completely up for grabs.

Ryan Borucki’s recent bout with left elbow tightness has put him behind from the get-go, leaving Trent Thornton and Japanese signing Shun Yamaguchi as the favourites. That will ebb and flow when Grapefruit League games start on the weekend.

Jacob Waguespack, Sean Reid-Foley, Anthony Kay and T.J. Zeuch are all on the outside looking in.

Montoyo said Reid-Foley will remain a starter at Triple-A, but a sensible shift to the bullpen eventually seems like a foregone conclusion at this point.

While Reid-Foley has survived all the extra depth added this winter for now, lefty-hander Thomas Pannone wasn’t as lucky.

Montoyo said the southpaw will be competing for a bullpen spot this spring.

As of today, you can lock in three bullpen jobs: Ken Giles will be the closer, and off-season additions Rafael Dolis and Anthony Bass will have roles, likely in leverage spots late in games if they pitch well this spring.

Sam Gaviglio and Wilmer Font should have jobs, as well.

The decision on the fifth starter will send one of Thornton or Yamaguchi to the ’pen, leaving two open spots for a group of 13 arms with varying levels of opportunity.

Pannone and Waguespack are two of the options, as is hard throwing Canadian Jordan Romano.

But the names to keep an eye on come from the non-roster pile.

A.J. Cole is an intriguing former starter who has only been deployed in short stints for a couple of years now.

He struck out 30 batters across 26 innings with the Cleveland Indians last year, and the 6-foot-5 right-hander is a former top prospect of the Washington Nationals. There’s an element of upside that the others don’t have.

Canadian Phillippe Aumont is another big right-hander to watch, and he’d be a feel-good story if he made the club, having not pitched in the big leagues since 2015.