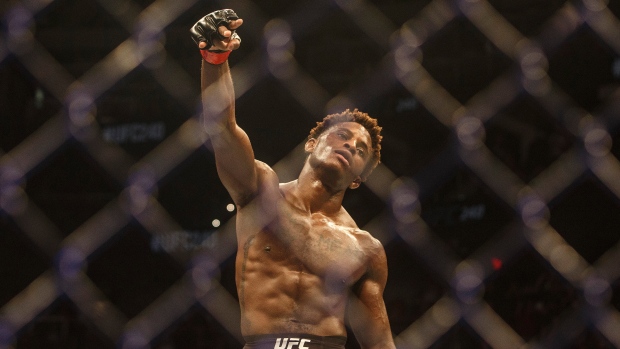 Featherweight (Mean) Hakeem Dawodu is one of four Canadians lined up for a UFC Fight Night card Feb. 5 in Las Vegas.

Dawodu (12-2-1) is coming off a loss by unanimous decision to Russian Movsar Evloev in June that snapped a five-fight win streak. The 30-year-old from Calgary came into the bout ranked 15th among 145-pound contenders but has since dropped out of the rankings.

Barriault (13-4-0 with one no contest) has won two straight after opening his UFC account with three straight losses and a no-contest. The 31-year-old, who fights out of Quebec City, scored a unanimous decision in September over Dalcha Lungiambula, a native of the Democratic Republic of Congo who fights out of South Africa.

His no-contest started as a win over Poland's Oskar Piechota in June 2020. But it was turned into a no-contest after the Canadian tested positive for ostarine. Barriault blamed the positive test on tainted supplements, with the UFC backing up his claim. While finding no evidence of intentional use, the U.S. Anti-Doping Agency handed him a six-month ban.

Njokuani (20-7-0) is a former Bellator fighter who won his way into the UFC with a TKO victory over Brazil's Mario Filipe de Souza in September on Dana White's Contender Series.

Gordon (13-5-0), a 31-year-old from Calgary who now calls Toronto home, snapped a two-fight losing streak with a win via decision over Brazil's Francisco (Sniper) Figueiredo in July.

Bondar (14-2-0) carries an eight-fight win streak into his UFC debut.

Davis (20-11-0) is coming off a decision loss in June to Sweden's Pannie (Banzai) Kianzad. The 37-year-old Davis, a native of Port Colborne, Ont. who now makes her home in San Jose, has lost four of her last five fights and is 7-6-0 in the UFC.

Davis, whose career stalled for 19 months due to shoulder surgery, fought for the bantamweight title at UFC 175 in July 2014, losing by KO to (Rowdy) Ronda Rousey in 16 seconds. A veteran of Invicta and Strikeforce, she is 7-6-0 in the UFC.

Stoliarenko (9-5-2) has lost her two UFC bouts to date. The 28-year-old from Lithuania was submitted by Julia (Raging Panda) Avila last time out in June.

Anheliger, who trains in Calgary but calls suburban Airdrie home, earned his UFC contract in September after winning a split decision over Tajikistan's Muin Gafurov on Dana White's Contender Series.

"Hell of a fight and he's a Canadian,'' White said in announcing the 135-pounder would get a UFC contract.

Anheliger extended his win streak to nine, dating back to May 2016.

Strader (5-2-0) lost his UFC debut last time out, stopped in the first round by Montel (Quik) Jackson in March.

Cirkunov (15-7-0) moved down to middleweight from light-heavyweight last time out, losing a split decision to Poland's Krzysztof Jotko in October. The 34-year-old from Toronto won his first four UFC fights but has gone 2-5-0 since.

Muradov (25-7-0) was submitted by Gerald (GM3) Meerschaert in August after winning his first three UFC fights.

This report by The Canadian Press was first published Dec. 29, 2021