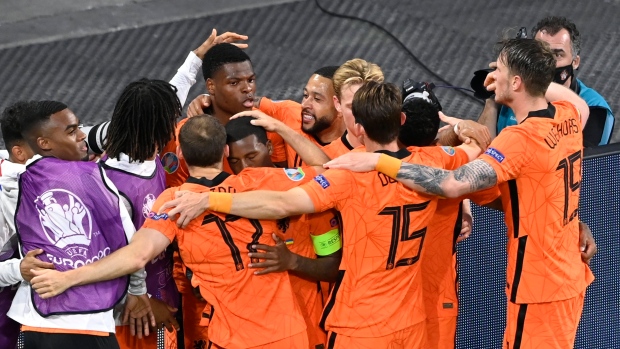 The Dutch waited longer than they had wanted to see their national men’s team return to a major international tournament.

At least on paper, their Group C opener versus Ukraine was projected to be their toughest test of the group stage.

But 45 minutes into their Matchday 1 showdown, Netherlands and Ukraine were scoreless.

Nothing from the first half foreshadowed what happened next.

Georginio Wijnaldum opened the scoring for the Dutch in the 52nd minute.

Six minutes later, Wout Weghorst doubled their advantage with a goal in the 58th minute.

Wout Weghorst makes it 2-0 for The Netherlands! #EURO2020 pic.twitter.com/OmnJvjEOku

With a 2-0 lead, the Netherlands had a 95 per cent win probability and appeared to be a lock to take the maximum three points.

However, Andriy Yarmolenko cut Ukraine’s deficit in half with a goal in the 75th minute.

The match is all tied up! 😱 #EURO2020 pic.twitter.com/DmvvvVNSl3

In less than five minutes, the win probability for the Netherlands went from 95 per cent to just over 25 per cent.

With just over 10 minutes left in regulation, it seemed as though the victory had slipped from the grasp of Frank de Boer’s grasp.

However, the Dutch had one last surprise in store as they went all-in to try to salvage the win.

Making his Euro debut, Denzel Dumfries delivered the go-ahead goal for Netherlands in the 85th minute.

In fact, Dumfries, Wijnaldum and Weghorst were all making their debuts at Euro, which made it the first time since 1976 that three players scored for a team in their Euro debuts in a single game.

The Dutch would hold on for a 3-2 win, joining Austria at the top of Group C with three points after the latter recorded a 3-1 win over North Macedonia in their tournament opener.

Netherlands has advanced to the knockout stages in three of the last four European Championships in which they won their first match.

Next up for the Netherlands is a Matchday 2 showdown with Austria, which could determine the winner of Group C.