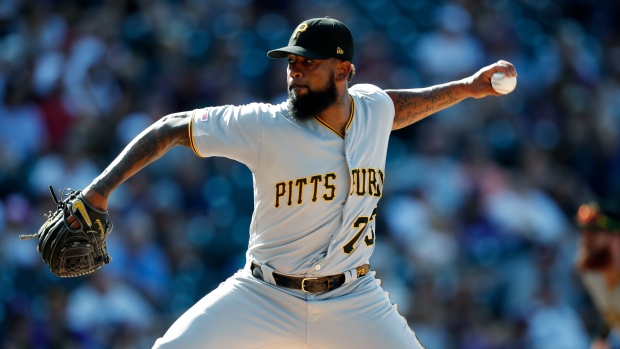 GREENSBURG, Pa. — Pittsburgh Pirates closer Felipe Vázquez was being held Wednesday in a Pennsylvania jail on multiple felony charges after allegedly telling investigators he attempted to have sex with an underage girl during a meeting at her house in 2017.

Vázquez is charged with statutory sexual assault, unlawful contact with a minor and corruption of minors, all felonies, and a misdemeanour count of indecent assault of a person under 16 years old.

The charges are related to Vázquez's alleged encounters with a girl starting in 2017, when she was 13 and living about an hour east of downtown Pittsburgh. Vázquez was expected to be arraigned Wednesday in Westmoreland County, though it was uncertain whether he would attend the hearing in person or do it via video from the Allegheny County Jail. Vázquez has been in the jail since surrendering to authorities Tuesday on a felony warrant issued in Florida stemming from illicit electronic communication with the same girl.

Vázquez began talking to the girl on social media in 2017 before driving to her house in the borough of Scottdale, a state police trooper wrote in court papers.

In an interview with troopers last month, she said she got in Vázquez's car, he removed her pants and tried to have sex with her, the trooper wrote. On Tuesday, troopers interviewed Vázquez at his residence and wrote that he admitted to driving to the girl's house and trying to initiate intercourse. Troopers also said Vázquez admitted receiving explicit photos of the girl by cellphone and texting her explicit messages as recently as July.

Pennsylvania authorities began investigating the 28-year-old Vázquez in August after being contacted by the Florida Department of Law Enforcement. The girl's mother contacted Florida officials after learning of an alleged sexual relationship between Vázquez and a teenage girl living in Lee County.

The arrest warrant from Florida accuses Vázquez of one count of computer pornography/solicitation of a child and one count of providing obscene material to minors. Pennsylvania officials do not plan to pursue extradition until their investigation is completed.

Vázquez was denied bond during a hearing Tuesday on the Florida charges, with the judge saying the Venezuelan-born Vázquez was a flight risk.

According to the criminal complaint, Vázquez initially claimed he couldn't remember the girl's name but said that she attempted to reach out to him through social media. Vázquez at first said he refused to communicate with her because she looked too young, police said. They said Vázquez later acknowledged exchanging photos and videos of a sexual nature with the girl and also visiting her house.

Stephen Limani, a state police spokesman, said the girl moved from Pennsylvania to Florida at some point after the interaction with Vázquez began, though Limani said there was no evidence the move had anything to do with their relationship.

Michael Comber, a lawyer for Vázquez, did not immediately return a request for comment.

Major League Baseball placed Vázquez on administrative leave under its agreement with the players' association on handling domestic violence, sexual assault and child abuse. Administrative leave is not considered discipline. Vázquez goes on the restricted list and continues to receive his $4 million salary but is ineligible to play.

Workers removed a banner depicting Vázquez from outside PNC Park before the Pirates lost to the Mariners on Tuesday night. Team president Frank Coonelly, general manager Neal Huntington and manager Clint Hurdle addressed the players in a pregame meeting and there was a sombre mood in the clubhouse afterward. By the time the game ended, Vázquez's locker had been cleaned out and given to another player.