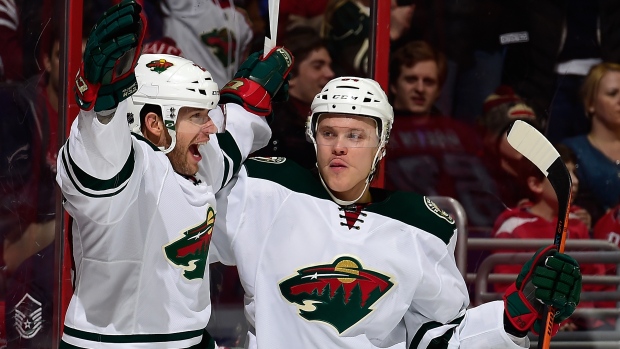 WASHINGTON - For the first two periods Thursday night, the Minnesota Wild were shut down by Braden Holtby and the Washington Capitals.

Jason Pominville scored two third-period goals, Devan Dubnyk made 24 saves, and the Wild rallied for a 2-1 win over the Capitals.

Pominville tied the game with his 14th goal of the season off a scramble in front of the net at 9:19 of the period, then blasted a high shot past Holtby from the left circle with 5:32 left after a Washington turnover in the neutral zone.

"I give our guys a lot of credit for not getting frustrated over the course of the game," Wild coach Mike Yeo said. "This is not the type of game where you could go out and expect to score four or five goals."

Zach Parise had two assists for Minnesota, which has won four straight and 15 of 18.

"We're a confident group right now and even though we're down by one after two on the road, I think we did a lot of good things in the first couple of periods and finally got rewarded," Pominville said. "It wasn't pretty, but sometimes you need those."

Dubnyk has started a franchise-record 22 straight games with the Wild. He is 17-3-1 with a 1.62 goals-against average in those games.

Holtby made 28 saves for the Capitals, who were without NHL goals leader Alex Ovechkin, who was out with a lower-body injury.

The Wild have allowed just 12 goals in their past eight games.

"It's sort of like trench warfare," Trotz said of playing the Wild. "You just have to take it inch-by-inch, and when you make a mistake, they're going to capitalize on it."

Curtis Glencross scored for the Capitals, his 10th of the season and first since coming to Washington from Calgary in a trade on Sunday.

Washington took an early lead, getting a power-play goal just 16 seconds after Thomas Vanek was sent off for high-sticking at 2:35 of the first period.

Glencross took a pass from Evgeny Kuznetsov and skated in along the right boards. He fired a shot from a tough angle and beat Dubnyk over the goalie's shoulder.

It was only the second goal allowed by Minnesota in its past 49 times short-handed.

The Capitals nearly took a two-goal lead when Andre Burakovsky put a cross-ice pass on Marcus Johansson's stick on a rush late in the second period, but Johansson's shot hit the post.

In the opening minutes of the third, Johansson's slap shot clanged off the crossbar.

Minnesota tied it after Holtby made a sliding save on Pominville, who dropped his stick. He was able to regain it as play continued and then poked the puck past Holtby during a scramble.

"There were guys diving, scratching and pulling, doing everything to keep it out of our net, but it found its way in there and it's a tie game," Capitals defenceman Matt Niskanen said.

Then with Parise forechecking defenceman Mike Green, Green's pass was corralled near the centre line by Pominville, who skated in with Parise and fired the game-winner.

Scratched after missing the morning skate and pre-game warmup, Ovechkin had scored two goals in each of Washington's past two games. He leads the league with 43 goals.