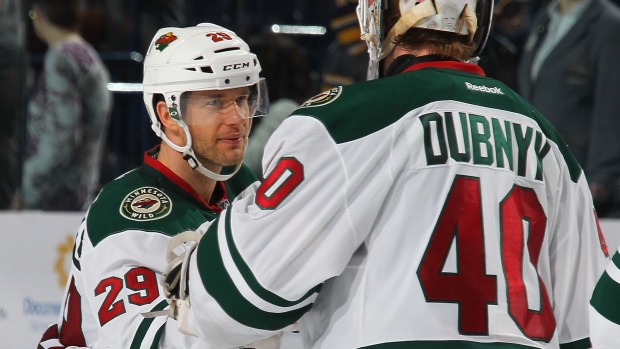 BUFFALO, N.Y. - The Minnesota Wild are finding new ways to win on their push toward the playoffs.

Jason Pominville scored in the fourth round of the shootout to give the Wild a 3-2 victory over the Buffalo Sabres on Saturday.

It was the first shootout victory of the season for the Wild and the second time in 25 games this season that the Wild won when trailing at the start of the third period.

Minnesota has won four in a row.

"Winning those games where it's a tight game or you've got to come back to win is something that shows a lot about our team for sure," Pominville said.

Charlie Coyle also scored in the shootout, Mikko Koivu and David Jones had regulation goals, and Devan Dubnyk made 30 saves for the Wild.

"Every single point is important and we've got to keep getting better and keep building our game," Koivu said.

Rookie centre Jack Eichel scored his 19th goal of the season and had an assist for the Sabres. Eichel also had a goal in the shootout. Johan Larsson also had a goal and Robin Lehner made 28 saves.

"I think we played well, too," Eichel said. "We had a lot of chances. We did a lot of good things as a team. It's a tough one to swallow."

It was also the Wild's first overtime game under interim coach John Torchetti, who replaced Mike Yeo on Feb. 13. The Wild are 8-3 overall and 5-2 on the road since Torchetti took over.

Eichel's shootout goal was the first of his career and the first by a Sabres player since Oct. 21. Dubnyk stopped shots from Evander Kane, Sam Reinhart and Marcus Foligno and the Sabres fell to 0-4 in shootouts this season.

"It's just frustrating with our shootout results this year," Eichel said. "The shootout's an opportunity to grab an extra point. I think as a group we can bear down and start taking advantage of it."

Koivu tied the game at 2-2 with a power-play goal with 5:41 left in the third period. Matt Dumba sent a cross-ice pass to Koivu for a one-timer from the right slot.

The Wild have scored a power-play goal in a franchise-record 12 straight road games. Koivu has scored a team-high nine of his 15 goals on the power play.

The Sabres had killed 27 of the past 29 power-play chances entering the game.

"A big kills probably wins us the game," Sabres coach Dan Bylsma said. "Our penalty kill has been so good for us for long periods of the game."

The Sabres scored two power-play goals in a span of 1:23 to pull ahead early in the second period.

Larsson tied the game 52 seconds into the power play, redirecting the rebound after Dubnyk kicked Rasmus Ristolainen's shot from the point to the left side of the net.

Eichel put Buffalo ahead with his 19th goal of the season. Taking a cross-crease pass from fellow rookie Sam Reinhart, Eichel beat a diving Dubnyk with a wrist shot to the top left corner.

The Sabres power play had scored one goal in 15 chances over its past five games but found success against the Wild's 28th-ranked penalty kill, which has allowed eight goals on its past 13 chances.

"I think it will get better," Torchetti said. "We're not getting the results. We have to solve the solution, not worry about the problem. Keep working on it and keep talking about it and good things will come."

After a lacklustre first period, the Sabers dominated the second. The Wild didn't put a shot on goal through the first 10 minutes and Lehner only had to make five saves for the duration of the period while the Sabres sent 13 shots at Dubnyk.

The Sabres didn't record a shot on goal in the first eight minutes of the game and the Wild had a 10-4 shots on goal advantage in the first period.

Jones gave the Wild a 1-0 lead 2:16 into the game, scoring his first goal since being acquired in a trade with Calgary on Monday. Carrying the puck on a rush up the right side, Jones hit the post on a wrist shot and the puck bounced off the back of Sabres defenceman Rasmus Ristolainen's skate and into the net.

NOTES: Pominville went to the locker room in the first period with a lower body injury, but returned in the second period. Pominville has played in 230 straight games, the third-longest streak in franchise history. ... LW Jason Zucker returned to the Wild lineup after missing six games with a concussion. ... Eichel and Reinhart are the first pair of Sabres rookies to record more than 30 points since current Wild players Pominville and Thomas Vanek in 2006. ... The previous NHL team to score a power-play goal in 12 consecutive road games was the Detroit Red Wings from Dec. 27, 2008 to Feb. 10, 2009.