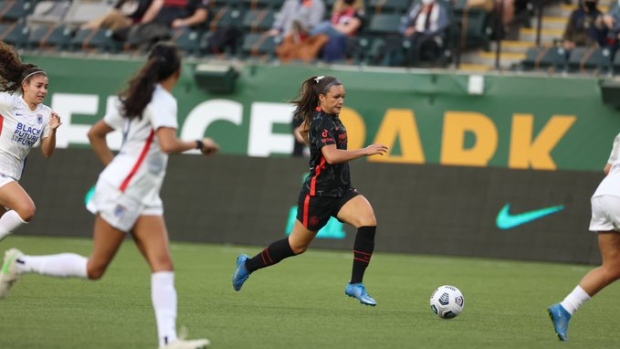 PORTLAND, Ore. — Lindsey Horan and Simone Charley scored and the Portland Thorns wrapped up a spot in the preseason Challenge Cup final with a 2-0 victory over OL Reign on Wednesday night.

The Thorns have won their first three Challenge Cup matches to secure the top spot in the tournament's West Division standings. The final is set for May 8.

National team players appeared for their clubs for the first time in the tournament after international play. The United States had a pair of exhibition matches in Europe as the team prepares for the Tokyo Olympics.

Megan Rapinoe and Jessica Fishlock (Wales) were available as substitutes for the Reign, while Becky Sauerbrunn, Lindsey Horan, Christine Sinclair (Canada), Crystal Dunn and Sophia Smith were all in the Thorns' starting lineup.

Horan put the Thorns on top early with a goal on a free kick in the 16th minute. Charley added the second moments into the second half.

Rapinoe had a good chance in the 80th minute but Thorns goalkeeper Adrianna Franch reached out to stop it.

The game marked the Portland debut of Dunn, who joined the Thorns in the off-season.

Earlier Wednesday, the Chicago Red Stars played to a 1-1 draw with Kansas City. Sydney Leroux scored in the Orlando Pride's 1-0 victory over the Washington Spirit.