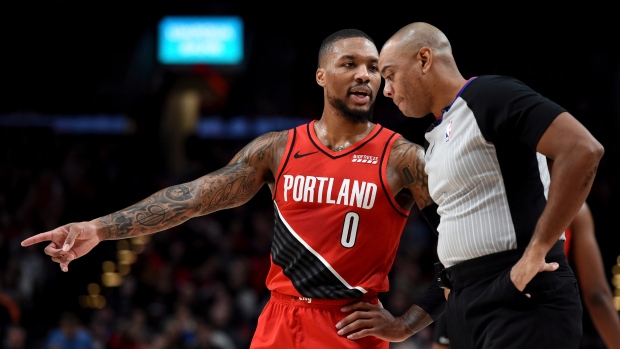 When the NBA was brought to a halt on March 11 due to the COVID-19 global pandemic, All-Star Damian Lillard and the 29-37 Portland Trail Blazers sat ninth in the Western Conference, 3.5 games behind the Memphis Grizzlies for the eighth and final playoff spot with 16 games left in the regular season.

Lillard told ESPN that if the NBA is going to return this season, a play-in tournament for the lower ranked teams still in the hunt might be the fairest option.

"I feel like a play-in tournament would be perfect, just because we actually were in striking distance and also had enough games to get in the playoffs," Lillard said Wednesday. "But to that point, if they did decide that we're just gonna go straight to the playoffs, obviously, we would all be disappointed.

"We haven't performed to be in that top eight. So if that's the case, then fine. But if we're gonna just come back to play games, I feel like that'd be harder on everybody else."

Earlier this week, the 29-year-old said he wouldn't come back to play in "meaningless" games if nothing was on the line.

"If we come back and they're just like, 'We're adding a few games to finish the regular season,' and they're throwing us out there for meaningless games and we don't have a true opportunity to get into the playoffs, I'm going to be with my team because I'm a part of the team," Lillard told Yahoo! Sports' Chris Haynes. "But I'm not going to be participating. I'm telling you that right now. And you can put that [expletive] in there."

Lillard eased back on those comments while speaking to ESPN.

"I was just saying we've been off for two months, and if we come back, we want to play for something. So after this type of break, usually when you come back, especially with how fast we're gonna be jumping into playing, I think guys are at risk for injury, also at risk of being exposed to whatever because none of us have been around each other, if so many teams are gonna be in one spot.

The NBA is in talks with Disney’s ESPN Wide World of Sports Complex in Orlando to use their facilities as a neutral site to finish the 2019-20 season later this summer.