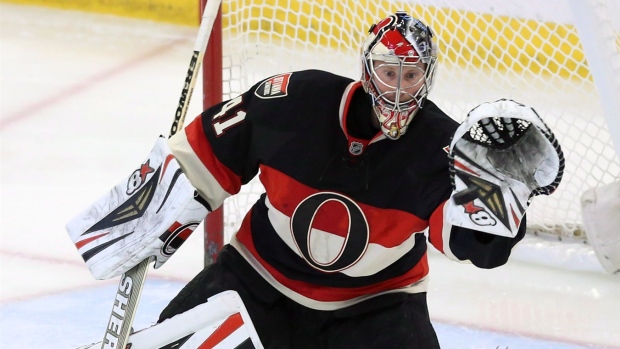 Next time you are watching a game and think to yourself, "that was a bad goal, the goalie has to have that shot", you may very well be 100 per cent correct, but you also may be completely wrong, based on some underlying factors.

Keep in mind a few things that are true when it comes to goaltending; physics and positioning, sometimes they both factor in to make a shot literally impossible to stop.

I was doing colour commentary for the Pittsburgh-Ottawa game the other day and on the winning goal with under two minutes left that beat Craig Anderson, (a slapshot from just inside the face-off dot by Christian Ehrhoff), there was a defensive breakdown that allowed Ehrhoff to walk right downtown, 'tee' it up and hammer it top shelf. Anderson did what he could to play the percentages on the shot, going into the butterfly, staying upright, and trying to make himself as big as possible. He was beaten by a great shot, but he also really had no chance to physically stop it if it didn't hit him.

I have been working with a brilliant physicist named Alain Hache (who is the author of 'the Physics of Hockey") and he has done some terrific work regarding the science of the speed of the puck coming at goalies and the subsequent reaction time they have to make the save. I have tried to pick his enormous brain as to enlighten me with the other side of goaltending and he has done a great job of helping break down some physics that come with velocity of shots.

This is a general thought process, but from a reaction standpoint, the average reaction time is 0.2 seconds. Now you have to factor in the distance where the shot comes from and the velocity (how hard the shot is) to see whether there is sufficient time to react to the puck, or if positioning is the only hope for the save.

Let's take that Christian Ehrhoff goal on Craig Anderson as an example. Anderson was at the top of his crease which was about six feet away from his goal line. Ehrhoff was just inside the faceoff dot and around 18-20 feet away in total distance. For this equation, let's round up and say 20 feet for clear numbers. If he shoots the puck at 80mph, which is likely based on how much time he had to walk into to it and how hard he shoots the puck (this is on the low end of how hard I think he shot it), the reaction time would be counted as this: 80mph from 20ft away = a reaction time of - 0.17seconds.

So given this formula, with that shot by Ehrhoff, Anderson would've had 0.17 seconds to make that save, and if the average athlete reacts at a rate of 0.2 seconds, what we are seeing is a shot that was unstoppable based on sheer reaction time. Now this is where positioning factors in because if Anderson had taken some ice for himself, he would at least get an opportunity to be hit by the puck. Had the shot only been 60mph, the reaction time would be 0.23, which, in turn, is not much more time for Anderson to read/react, but if he anticipates and reacts properly, he at least has a chance to stop it, given he is in the same position in net.

If this had been Zdeno Chara or Shea Weber firing it from there, hitting that 100mph neighbourhood, good luck. That's where you have to hope that it hits you, because with that scenario, you only have 0.14 seconds to react to a 100mph slapshot from that distance. The scary part with all of these reaction time scenarios is that in this case, it was a clear shot by Ehrhoff. There wasn't any potential screens/tips, you didn't have to fight through bodies or legs to track the puck, you didn't have to worry about a potential pass scenario where there are options for the shooter to factor in on your depth in the crease; all the checklist things that have to be considered in that initial read of the play that a goalie has to process in a split second.

Keep in mind as well when the using this formula, the distance is calculated from when the goalie first tracks the puck, meaning if the puck is shot from the point but the goalie doesn't see it until it goes by,  let's say a high screen in the slot, then the formula begins with the distance between the goalie and when he first sees it, not from where the puck originates.

So the next time you see a shot that goes in, and your initial thought is 'stoppable puck from that distance', there just may be some underlying science that factors in on the goal that helps explain why the goalie was 'late' to react.