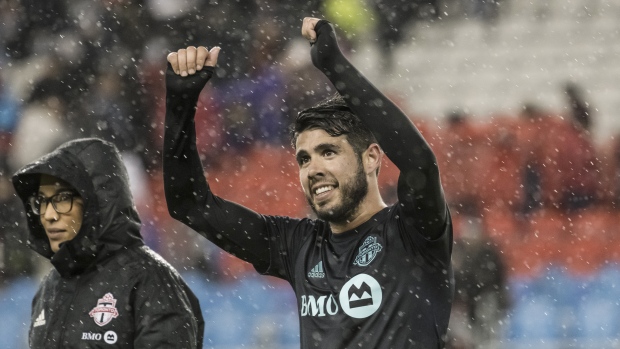 Six games and 18 goals into the MLS season, Toronto has shown it can score at will. But defending remains a problem.

"Clearly some things that we've to work on and deal with," coach Greg Vanney said by way of understatement after the roller-coaster 4-3 victory. "Again too many soft goals tonight that keep putting us in this position that we have to fight back from."

Toronto (4-1-1) has just one clean sheet this season and has conceded eight goals in the last three games and 11 goals in all. The defence is rickety without veteran Drew Moor, currently out with an adductor injury.

On the plus side, Spaniard Alejandro Pozuelo set a club record with two goals in 110 seconds to give Toronto a 2-1 first-half lead. Then, with Toronto trailing 3-2, substitute Jordan Hamilton scored two more goals only slightly farther apart to give the home side the late win.

Darwin Quintero scored twice, once from the penalty spot, and Angelo Rodriguez added another for Minnesota (3-3-1), which finished with nine men after Jan Gregus and Francisco Calvo were sent off in the 89th and 91st minutes, respectively.

Adding to the drama was Toronto striker Jozy Altidore, who left in the 82nd minute with hamstring tightness. After the game, the U.S. international sought our reporters to complain bitterly that a key member of the training staff had been barred from the club because of his association with now-departed forward Sebastian Giovinco.

"Which I think is ridiculous," said Altidore, who has had a history of hamstring problems. "So now this is what I'm faced with — games of egos ... Hopefully (team president Bill Manning) can put his ego aside and I can get the guy that's kept me healthy, kept Michael (Bradley) healthy, kept a bunch of the guys healthy and we can make things move forward.

"But to run a club you've got to be able to put your ego aside and put the players first. Hopefully that'll change."

Altidore was apparently referring to Giuseppe Gueli, who worked with Giovinco and others.

A club spokesman said Manning had no immediate comment.

Hamilton came on in the 73rd minute with Toronto trailing 3-2 and made an immediate impact. He scored in the 77th and 79th minutes, converting a fine pass from Jonathan Osorio for the first and then heading the ball in past the last defender after Altidore chipped goalkeeper Vito Mannone.

Quintero had put Minnesota ahead from the penalty spot in the 70th minute, after Chris Mavinga took down Angelo Rodriguez in the box.

Quintero, a Colombian international in his second MLS season, scored Minnesota's first-ever hat trick in a 4-3 win over TFC last July. Five of his 16 career goals have come against Toronto.

A soggy crowd announced at 22,651 saw an entertaining contest between two teams with high-octane offences. The two sides combined for 32 shots, including 14 on target.

Quintero put the visitors ahead in the 17th minute when Toronto was unable to handle a long ball in by Gregus. Quintero had called for the ball and held off fullback Richie Laryea to get it.

Goalkeeper Alex Bono was of two minds how to handle the situation and when he got to the bouncing ball at the edge of the penalty box, Quintero headed it over him and then tapped it in before showing off some questionable dance moves.

It was the first shot on target for either team and upped Quintero's total to four this season.

Pozuelo, who now has four goals and five assists in four MLS games with Toronto (4-1-1), then turned the game on its head.

After a Minnesota attack fizzled, a Mavinga clearance found the Spaniard steaming towards the Minnesota end with Altidore in a two-on-two. Pozuelo twisted and turned retreating defender Michael Boxall before hammering a right-footed shot from just outside the penalty box past a diving Mannone in the 28th minute.

Two minutes later, Justin Morrow found him between defenders in the box and he beat Mannone again, this time roofing it with his left foot.

He had scored two spectacular goals in his Toronto debut — his first brace as a professional — on March 29 against New York City FC and he delivered two more gems Friday. The goals came a club-record 110 seconds apart (Altidore scored goals 113 seconds apart in a 5-0 win over Orlando in August 2015).

But Rodriguez tied it at 2-2 in the 57th minute, heading in a cross from Romain Metanire. Defender Laurent Ciman thought Rodriguez had fouled him but referee Ismail Elfath disagreed.

"I thought we looked very good going forward," said Minnesota coach Adrian Heath. "We had a good shape about us, but we’ve conceded poor goals again. It's another game where we've scored three goals and come away with nothing. It's something we have to address."

Minnesota had to settle for a 3-3 tie with visiting New York City FC last weekend.

The Good Friday contest was the first on the new hybrid grass at BMO Field. Polyethylene fibres, measuring 20 centimetres long, were stitched 18 centimetres deep into the ground every 20 millimetres, allowing the roots of the natural grass to attach to the fibres for a stronger, firmer surface. Green Bay's Lambeau Field has the same surface.

The surface got rave reviews from the Toronto players.

Like other MLS teams this weekend, Toronto and Minnesota wore special eco-friendly jerseys made from fibres of plastic waste — in honour of Earth Day on Monday. Toronto's were a dark navy blue while Minnesota wore baby blue.