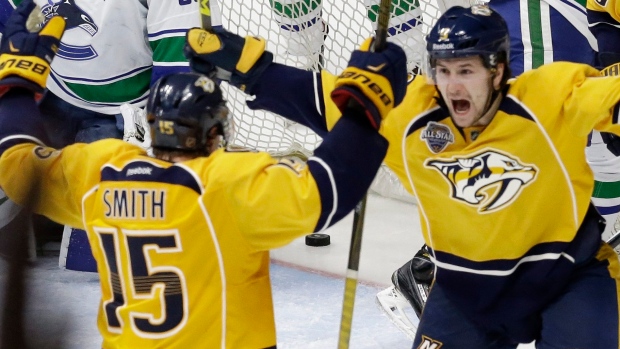 NASHVILLE, Tenn. - Just when it was looking hopeless, the Nashville Predators scored twice in the third period to tie the score. Craig Smith then won it in the shootout.

Smith scored the decisive goal in the fourth round of the tiebreaker, lifting Nashville to a 3-2 victory over the Vancouver Canucks on Thursday night.

James Neal and Filip Forsberg scored 1:12 apart to even the score at 2 with about 7 minutes remaining in regulation for the Predators.

"I think we started off pretty bad in the first (period), but the second was better so we kind of had a little bit of momentum going into the third," Forsberg said. "Obviously, from there we just created a lot of (chances). It was a really good effort by all of us.

Nashville's Pekka Rinne stopped 23 shots through overtime and is 11-1-2 in his last 14 games.

"I don't know what's the reason, but we've been really strong in the third period as of late and that was a key for us again," Rinne said. "A couple of big goals — Nealer and then Filip. Offensively, they've been carrying us and it's a great sign."

Forsbeg leads the Predators with 31 goals this season and Neal is second with 29.

"That was a great play by Colin (Wilson) to get me the puck there in a good spot and I was able to find the low blocker shot and use a little bit of a screen," Neal said. "So it was good to get that in. Willy did a great job with us and he's skating well, and he made some great plays."

Ryan Johansen also scored in the tiebreaker for Nashville, which improved its shootout record to 4-1.

"Yeah, the shootouts are good," Predators coach Peter Laviolette said. "Johansen is really good at it. You know, that trade gave us a real weapon in the shootout. He's really patient as you saw tonight."

Nashville acquired Johansen in a trade with Columbus for defenceman Seth Jones on Jan. 6. The Blue Jackets visit the Predators on Saturday.

Nashville, which holds the Western Conference's first wild-card spot, moved within two points of third-place Chicago in the Central Division.

Bo Horvat scored at 6:52 of the first period, poking in a rebound to end the Canucks' longest scoring drought in franchise history at 234:52. Daniel Sedin's power-play goal later in the period made it 2-0, and Ryan Miller had 30 saves as Vancouver lost its sixth straight. Miller fell to 4-0-1 in Nashville.

Jared McCann scored in the second round of the shootout for Vancouver, which last won when it beat Nashville on March 12.

The Canucks, who began the night 12th in the Western Conference, were shut out in their previous three games. Horvat's score was their first since the first period of a 3-1 loss to Colorado on March 16.

"The biggest thing we look for is the effort and there have been a couple games that is hasn't been right where we want it," Canucks coach Willie Desjardins said. "You look at (defenceman Nikita) Tryamkin, he was great tonight, played a lot of minutes. I thought Horvat played good tonight."

The Canucks made it 2-0 on Sedin's score with 5:21 left in the first as he took a pass from twin brother Henrik Sedin from behind the net and snapped a shot from the low slot past Rinne.

Vancouver had gone 0 for 26 on the power play before that goal. The Canucks hadn't scored on the man advantage in their previous eight games.

"It's never good to lose, but you've got to look at the way we played and I thought we played one of our best games of the year," Henrik Sedin said. "Getting the D involved, them coming back, but they've got a great team over there. They're Cup contenders and they're going to make a push."

Neal narrowed the gap to 2-1 by scoring from the low slot with 8:04 left in the third for his 29th goal of the season.

Forsberg tied it with a wraparound backhander with 6:52 remaining for his 31st.

Nashville's home point streak extended to nine games as it improved to 6-0-3 in the last nine games at Bridgestone Arena.

The Predators are 14-2-4 against Canadian teams after winning two of three against Vancouver.

NOTES: Nashville set a team record with its 31st sellout of the season as 17,113 filled the arena. ... Canucks RW Jannik Hansen, who has scored 19 goals, returned to the lineup after missing the past 11 games with a rib injury. He joined the first line with the Sedin brothers. ... Vancouver began a tough stretch against seven teams that appear to be playoff-bound.