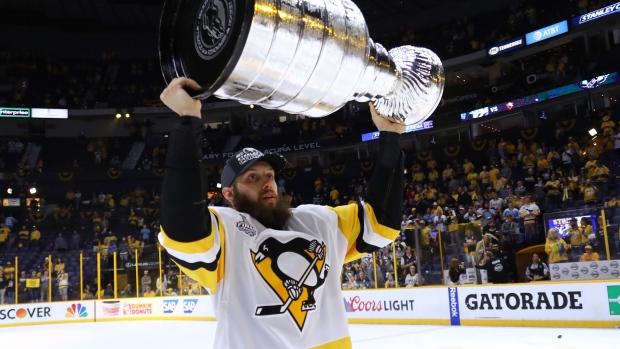 NASHVILLE — The Nashville Predators took care of an area of concern Saturday, signing centre Nick Bonino away from the Stanley Cup champion Pittsburgh Penguins with a $16.4 million, four-year contract.

Bonino was a key player for the Penguins during the past two postseasons, contributing a total of 25 points to help them hoist the Cup twice — including against the Predators last month. He averaged 33 points during two regular seasons in Pittsburgh.

During the Stanley Cup Final, he saw how a city that is already a popular stop in the league went to another level as the Predators played for the title for the first time.

Bonino broke his leg blocking a shot in Game 2 against Nashville, but played through the pain and finished the game before missing the rest of the series.

The 29-year-old from Hartford, Connecticut, has 75 goals and 187 points in his eight-year career. He played for the Anaheim Ducks during his first five years in the NHL before having a one-season stay in Vancouver and a two-year run with the Penguins.

Playing more in Nashville, perhaps on its second line, was part of the appeal of the team's pitch after being behind Sidney Crosby and Evgeni Malkin.

The Predators need him in part because they traded centre Colin Wilson to the Colorado Avalanche for a fourth-round pick in 2019. Nashville drafted Wilson No. 7 overall in 2008 and he had 95 goals and 237 points for the franchise.

"Colin brings experience and depth to our lineup," Avalanche general manager Joe Sakic said. "He's a two-way player who plays a strong game and is a good pro."

The Predators also brought back forward Scott Hartnell with a one-year, $1 million deal, adding depth up front for a franchise that lost James Neal to Vegas in the expansion draft.

Hartnell spent his first six seasons in Nashville after he was drafted No. 6 overall in 2000. Hartnell went on to play for the Philadelphia Flyers for seven seasons, becoming a first-time All-Star in 2012 while playing for Peter Laviolette, who is now behind the bench in Nashville.

"Absolutely love the guy," Hartnell said. "How do you not love his intensity? He's so well spoken. He gets the boys going. For our Stanley Cup run in Philadelphia, it was 100 per cent because of Laviolette."

Hartnell spent the past two seasons with the Columbus Blue Jackets, scoring 13 goals and adding 24 assists last season. He has 314 career goals and 683 points.