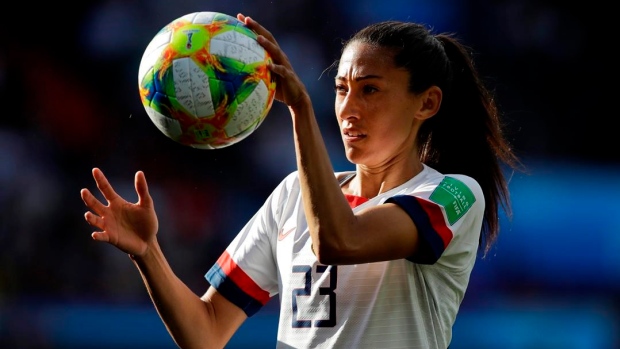 LE HAVRE, France — A devastating missed penalty kick by Christen Press in a loss at the Olympics could have been the lowest point of her career. Instead, it was a motivator and defining moment for the American forward.

"I think when I look back on my career, all the moments that I'm most proud of have come after failure," she said. "That's the easiest one to point at and look at, and look at that clear failure, and then evaluate how I did in responding to it.

"I think the strength that it takes to step back up and be courageous and let it go, and to continue to fight for your dreams and not let the outside noise affect what you're doing, I am very proud of that."

The missed final penalty kick during a shootout against Sweden in the quarterfinals at the 2016 Rio Olympics helped eliminate the United States and a tearful Press was consoled by her teammates. It was the earliest Olympic exit for the Americans.

As the United States prepared to face Sweden on Thursday at the Women's World Cup, Press said she's only watched pieces of that match. The Swedes — led then by former U.S. coach Pia Sundhage — bunkered in on defence against the Americans.

Tied after three rounds in the shootout, Sweden captain Caroline Seger got past U.S. goalkeeper Hope Solo before Press sailed the Americans' fifth penalty kick over the crossbar. Lisa Dahlkvist wrong-footed Solo to give Sweden the 4-3 shootout victory.

Solo infamously called the Swedes "a bunch of cowards" after in alleging they played a defensive match to choke the Americans' chances.

The rematch between the two teams is a highlight of four Thursday games in France, but the United States is not interested in dwelling on that defeat as it attempts to win a second consecutive Cup.

"I think players and coaches are not focused on what was, we're focused on what will be," coach Jill Ellis said. "That's really where you have to be. You've got to look forward. That's the past."

Press played for clubs in Sweden for two years from 2012-14 and again in 2018 between stints in the National Women's Soccer League. She came off the bench in the 13-0 rout of Thailand in the opener, but Press got the start as part of seven lineup changes for the 3-0 victory over Chile on Sunday.

The United States has played Sweden six times in the group stage at the World Cup, including a 0-0 draw four years ago in Canada. The only meeting since the Olympics was a 1-0 U.S. win in a 2017 friendly at Goteborg.

Press, playing in her second World Cup, admitted Thursday there might be a bit of revenge at play.

"Despite the fact that it's been three years, you don't forget the taste in your mouth when you fail and when you lose in a world championship," Press said. "And I think there's a little bit of that that will definitely act as motivation."