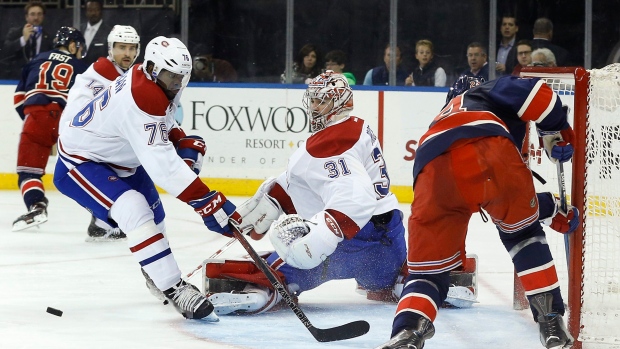 Devante Smith-Pelly and Alex Galchenyuk scored in the opening 1:29 of the third, and Montreal beat the New York Rangers 5-1 Wednesday night in a matchup of the top two teams in the Eastern Conference.

"You want to keep your foot on the pedal," said Smith-Pelly, who did not know Price was hurt until backup Mike Condon led the team onto the ice with the Canadiens leading 2-1. "Obviously, we knew they were going to come out hard in the third and with a big push and we'd have to score early and kind of take the wind out of them."

The Canadiens did just that in snapping the Rangers' nine-game winning streak at home and handing them only their second loss in 12 games.

And it wasn't the big-name players who came through for Montreal.

Smith-Pelley had his first two-goal game in the NHL. Sven Andrighetto got his first of the season and Max Pacioretty put the finishing touches on it with a power-play goal.

The Canadiens have handed the Rangers (16-4-2) two of their four losses in regulation this season. The only concern for Montreal after the game was Price, who stopped 22 shots in the first two periods.

Coach Michel Therrien said the 2015 NHL MVP and Vezina Trophy winner was sidelined by the same lower-body injury that kept him out for eight games earlier this month. This was his third game back.

"The medical staff was really comfortable and Carey was really comfortable to come back," Therrien said. "If we had any doubt, for sure, we would not take that risk. That's all we can say about it. He tweaked it again tonight. That's why we don't want to take any chance. It's still early in the season, so it's important for us when he plays, he's got to make sure he is healthy."

Rick Nash scored for the Rangers in their largest loss of the season. New York goalie Henrik Lundqvist was lifted after Pacioretty's power-play goal made it 5-1.

The Canadiens (17-4-2) made sure Condon never felt the pressure of a close game at Madison Square Garden. Smith-Pelly scored his second of the night and third of the season from in close off a nice feed by Tomas Plekanec, who had three assists.

Galchenyuk scored on a bad-angle shot that Lundqvist misplayed in helping Montreal move into first place in the conference.

The Canadiens were clearly the better team for the first half of the game and jumped out to a 2-0 lead, scoring early in the first and second.

Andrighetto, recalled from St. John's last week, put Montreal ahead 4:45 after the opening faceoff with his first goal this season and third of his career. Lars Eller deflected a point shot by P.K. Subban and the puck went to a wide-open Andrighetto for a shot into the net before Lundqvist could get across.

Smith-Pelly got his first at 2:25 of the second period. Rangers defenceman Dan Girardi got his stick on a pass around the back of the Rangers' net by Plekanec, but it only slowed the puck down. Pacioretty got the puck and quickly sent it in front to a wide-open Smith-Pelly for a point-blank shot past Lundqvist.

"It seems to be the same story against these guys every time," Girardi said. "We make the mistakes and they make us pay. They are a very skilled offensive team and you make one bad play, it gets picked off, and they are coming right back. Make a couple of quick passes and it seems to be in the back of your net."

Nash, who has five goals in the last three games, got the Rangers on the board by deflecting Ryan McDonagh's shot for a power-play goal at 17:42 of the second.