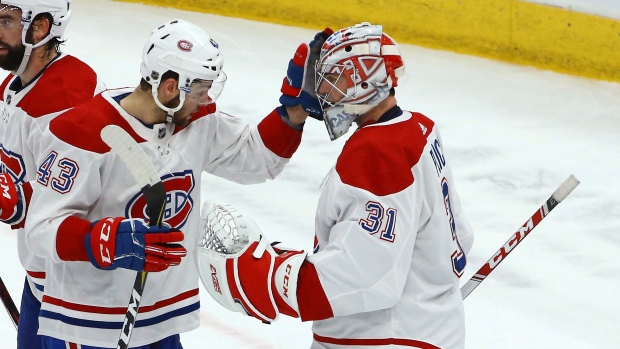 GLENDALE, Ariz. — Carey Price reached another milestone and the Montreal Canadiens got another big win.

Price stopped 36 shots in his 300th career win, leading the Canadiens to a 2-1 victory over the slumping Arizona Coyotes on Thursday night.

Paul Byron and Shea Weber scored as Montreal won the second game of a back-to-back for the first time in four tries this season. The Canadiens, coming off a 2-1 loss at Colorado on Wednesday night, have won six of their last nine overall.

"Definitely a trying two games with the travel involved," said Price, who started both games. "But we found a way to do it. Great character showed up tonight."

Oliver Ekman-Larsson scored for the Coyotes, who have just two goals in the last three games and have lost seven of eight. Darcy Kuemper stopped 26 shots.

"We're close, but we don't get points being close," Ekman-Larsson said. "We're trying to get back in the race and we're trying to find our game right now."

This was the first meeting between the teams since their off-season trade that sent Max Domi to Montreal and Alex Galchenyuk to Arizona.

"That was fun. So many memories here," Domi said. "It was like, emotional. I was only here for three years but it felt like 20."

The Canadiens started the second period on a power play after the Coyotes' Nick Cousins checked Jeff Petry against the boards just before the first period horn. Cousins was whistled for high-sticking on the hit.

Montreal took advantage of the extra man 22 seconds into the second to take a 1-0 lead. Off a draw, Jonathan Drouin passed to Petry, who fed Weber for an uncontested shot from distance that beat Kuemper.

Arizona answered at 6:49 on a power play of its own. Jakob Chychrun tipped the puck out of traffic to Nick Schmaltz, who set up Ekman-Larsson for the Coyotes captain's fourth. Ekman-Larrson now has 13 points in 13 career games against the Canadiens, and his 47 power-play goals since 2013 are most among NHL defencemen.

The Coyotes got close to taking the lead but Price had a number of quick-reflex stops. One of those came off his left leg pad without him seeing the puck.

"Carey Price is world class," Coyotes coach Rick Tocchet said. "I thought we missed the net a couple of times when we had people in front. We've got to hit those nets. But guys worked hard."

The Canadiens took the lead for good at 1:16 of the third with Byron's eighth goal.

Notes: Domi, who totalled 135 points with the Coyotes, got two video board welcomes, one each in the first and third periods. He received warm applause and offered a quick wave after the second announcement. "It's an honour for sure. It was a lot of fun to play here," Domi said. ... The Coyotes called up F Conor Garland and G Adin Hill from AHL Tucson before Thursday's game, a day after assigning them to Tucson. Hill was needed as the backup to Kuemper with Calvin Pickard scratched and Antti Raanta likely out for the season.

Canadiens: At Vegas on Saturday, the third game on a six-game trip.

Coyotes: Host Colorado on Saturday to close out a three-game homestand.