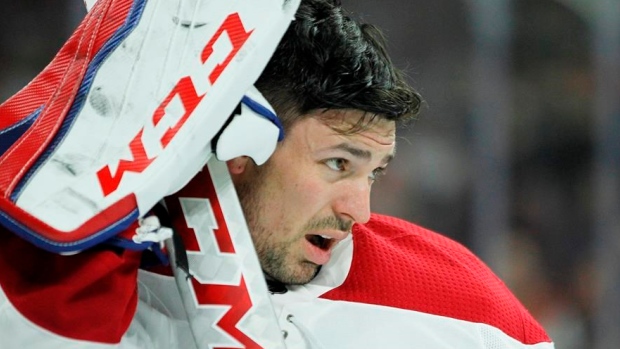 BROSSARD, Que. — Goaltender Carey Price missed practice Wednesday as Montreal Canadiens medical staff checked him out a day after he was struck on the mask by a shot in Philadelphia.

Coach Claude Julien said Price did not suffer a concussion but more would be known about his condition after tests are taken.

It is uncertain whether he'll play Thursday night when the New York Rangers visit the Bell Centre. The Canadiens recalled goalie Charlie Lindgren, along with defenceman Noah Juulsen, from the AHL's Laval Rocket.

"It has to do with the puck he got hit in the mask with, but that's all we know now," Julien said of Price, who was struck by a short from Shayne Gostibehere in the second period of a 3-2 overtime defeat in Philadelphia on Tuesday night.

Price appeared shaken up by the shot. He was checked out by a trainer on the ice but stayed in the game. While he allowed his first goal of the night shortly after, he had a solid game in stopping 30 of 33 shots.

Julien also said that defenceman Shea Weber, who has missed 33 games, saw a specialist on Wednesday to examine his lingering left foot injury.

The coach said Weber, who was hit on the foot in the opening game of the regular season, played through the injury earlier in the season.

Forward Andrew Shaw, who resumed practice this week after a lower body injury, was also missing with a flu. He will not play against New York.

The Canadiens also traded first-year defenceman Jakub Jerabek to the Washington Capitals for a fifth round draft pick in 2019 on Wednesday.

Julien said Jerabek was eligible for unrestricted free agency this summer and the Canadiens weren't sure if they would re-sign him. The 26-year-old Czech, who had not been in the lineup since Feb. 1, had a goal and three assists in 25 NHL games.