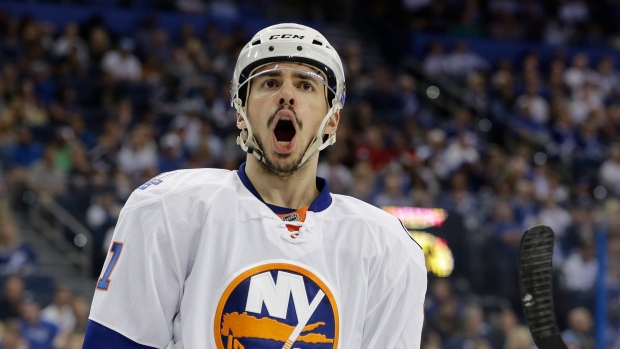 Shane Prince scored twice during a three-goal first period and John Tavares had a goal and an assist Wednesday night to help the Islanders beat one of the NHL's top goalies 5-3 in Game 1 of the second-round Stanley Cup playoff series.

The defending Eastern Conference champions pulled Bishop midway through the second period after the Islanders scored four goals on their first 13 shots, one of them on a knuckler that fluttered through the 6-foot-7 goaltender's legs.

"He'd probably like to have one back, but at the end of the day he's going to bounce back. He's a great goaltender. It's a long series," New York coach Jack Capuano said.

"It's just one game. But whatever guy's in there, we've just got to continue to do what we need to do and get pucks and bodies to the net. Some of our shots had eyes. Again, you need some puck luck in this game if you're going to win, and we had that tonight."

Taking up where he left off in helping the Islanders advance beyond the first round for the first time in 23 years, Tavares assisted on Travis Hamonic's goal that erased an early deficit and later scored his sixth post-season goal on a blistering shot from the left circle to give New York a 4-1 lead midway through the second.

The Islanders needed overtime to get three of four victories against the Florida Panthers in the opening round. This one was never seriously in doubt after New York wiped out the 1-0 lead Tampa Bay took on Ondrel Palat's goal just over three minutes into the game.

"I think our group's got a great mindset. A lot of confidence, obviously," Tavares said. "We're all very familiar with one another and just want to keep rolling."

Tampa Bay pulled to 4-3 on third-period goals by Nikita Kucherov and Valtteri Filppula before Cal Clutterbuck's empty-netter sealed the victory in the final minute.

"This is not how we wanted to start, but at the time same we've been in this situation before and we'll bounce back from this," Lightning defenceman Victor Hedman said.

"In the third we played a lot better and had opportunities to tie it up, but we put ourselves in a big hole. 'We almost got there, but being down three goals is tough."

Thomas Greiss, who won one game in overtime and two in double overtime against Florida, finished with 33 saves for the Islanders. They were outshot 28-10 over the last two periods.

Game 2 is Saturday at Amalie Arena.

Bishop was superb in allowing no more than two goals in any of Tampa Bay's five games against Detroit in the opening round. He yielded four in 13 shots to the Islanders before replaced by Andrei Vasilevskiy.

Tampa Bay entered the series following a six-day layoff, but the benefit of the extended rest was debatable after the Islanders overcame the early deficit to take a two-goal lead into the first intermission.

Prince scored twice in the final 2:32 of the opening period, camping out alone in front of the net to deflect a pass from Ryan Strome through Bishop at 17:28 and beating the goalie with a wrist shot from the right circle with 2.1 seconds remaining .

"What hurt us was giving up two goals in the last two and a half minutes," Lightning coach Jon Cooper said. "We were way too soft in those last few minutes."

New York built the 3-1 lead despite failing to take advantage of its first two power-play opportunities. Given a third chance with a man-advantage, the Islanders struck with Tavares to make it 4-1.

"One of those nights where nothing goes your way. You just have to move on from it," the Lightning goalie said. "It's not about the last game, it's about the next one, so I need to focus on that."

Vasilevskiy stopped all eight shots the Islanders took at him, four in the last half of the second period and four more in the third.

Meanwhile, the Lightning pushed and pushed offensively before finally breaking through against Griess, who stopped 221 of 234 shots in the first round.

Kucherov scored his sixth goal this post-season at 7:41 of the third period. Filppula scored on a rebound shot with 2:32 left, trimming New York's lead to 4-3.

Notes: Capuano took a puck to the face during the third period, but returned to the bench before the end of the game. "''I've been hit more times, I think, than when I played," Capuano said. "Fortunately, it just caught me at the tip of the nose and nothing real serious." ... The Islanders' three-goal opening period ended Bishop's streak of allowing two or fewer goals in eight consecutive playoff games, dating to last year. ... The Lightning outshot the Islanders 11-5 in the second period and 17-5 in the third, finishing with 36 shots to New York's 22.