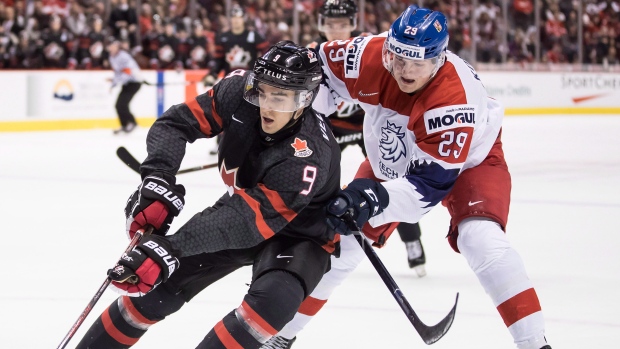 The Detroit Red Wings will loan Joe Veleno to Hockey Canada for the World Juniors, but the forward will play four more games with the AHL's Grand Rapids Griffins before heading to Europe.

Grand Rapids will play two games in San Diego and two in Bakersfield before wrapping up a West Coast swing on Dec. 17.

"He's been in our program so many times and been a tremendous leader and mentor for our group that we’re really excited that we got word that he’s going to be part of it moving forward," said McEwen.

"He was captain of the Hlinka team and we all love him," said Niagara forward Akil Thomas. "A huge addition, a great player and he’s going to make the team a lot better."

Veleno has three goals and six assists in 25 games with Detroit's farm team this season. Last year, he posted 104 points in 59 QMJHL games with Drummondville.

Canada finished sixth last year in Vancouver, the first time the country failed to reach the podium at a World Juniors on home ice.

"Hockey Canada's definitely motivated to put that to rest this year and in this tournament," McIsaac said. "Any time you wear the Canada jersey and end up coming out short it's tough and definitely took a little while to swallow that one."

McIsaac has played just three QMJHL games this season after undergoing shoulder surgery in the summer.

"It's going to take a little bit for me to get completely back to 100 per cent game shape and it’s part of the process," said the 19-year-old from Nova Scotia. "I rehabbed for two and a half months, three months in Detroit and we really pushed the envelope there making sure I was ready as far as the shoulder and conditioning-wise and they were happy with how everything went and I'm here now."

Lafrenière sat out the first practice for maintenance.

Sudbury centre Quinton Byfield missed the first practice due to a travel delay.

Owen Sound forward Aidan Dudas skated on his own before practice, but didn't take part in the main session.

"A little banged up," said McEwen, "so, we'll play that day by day and see where he's at. Moving forward it looks all right, but you have to be cautious ... he'll be carefully handled here the next few days."

Hockey Canada hopes to be down to a 23-man roster by Thursday when the selection camp wraps up following two games against uSports all-stars.