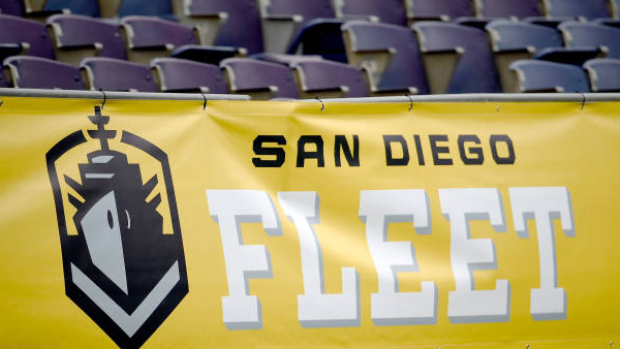 SAN DIEGO — Two years after the Chargers left their home of 56 seasons, pro football returned to San Diego on a cold, rainy winter Sunday, with a different dynamic mixed in with a beloved local tradition.

On the field at SDCCU Stadium, the San Diego Fleet of the new Alliance of American Football, coached by San Diegan Mike Martz, played their home opener against the Atlanta Legends on a field drenched by repeated downpours.

Members of the Chargers fan group Bolt Pride set up a tailgate next to the Rams World Order, many of whose members cheered for the Rams before they left for St. Louis after the 1994 season, and then welcomed them back in 2016.

"I'm from San Diego. I've got to represent my town, no matter what," said Bolt Pride member Jorge Santiesteban, 38. "There's disappointment that the Chargers left. I hate the owner of the team, you know what I mean? There's nothing I can do. A lot of people stayed on board, a lot of people didn't. I did. I've still got my season tickets. I support them 100 per cent."

The Rams World Order fans were here to support Martz, who was with the Rams when they moved to St. Louis and was their offensive co-ordinator when "The Greatest Show on Turf" won the Super Bowl after the 1999 season, and receivers coach Az-Zahir Hakim, a former player with the Rams and San Diego State.

"It's all about football," said Michael Martinez of Lake Elsinore, president of Rams World Order. "It's kind of sad with the San Diego Chargers leaving for L.A., but it's nice that San Diego has another football team. We're here to represent, we're here supporting Mike Martz, Az Hakim.

Fellow Rams World Order member Greg Hill of San Diego said he was living in Orange County when the Rams, who at the time played in Anaheim, left for St. Louis.

"We feel their pain," he said, referring to fans of the San Diego Chargers who have declined to support them in L.A. "Our team left us before coming back."

The rain probably kept many fans away. At the first play from scrimmage — the AAF did away with kickoffs — there might have roughly 9,000 fans in the 70,000-seat stadium, although there might have been more in the clubs and concourses. The Fleet announced the attendance as 20,019.

There has been plenty of angst in San Diego since the Chargers left, with some ex-fans hating on those who continue to support the Bolts.

There was no such angst in the parking lot Sunday as everyone's common goal was to try to stay dry and have fun.

"We're all here for the Fleet," Walchef said. "We all love football, we all love pro sports, we all love tailgating. That's why we're here."

Walchef understands the hate and the spite, and said San Diegans have the right to be upset with the way Chargers owner Dean Spanos left town. But he said he'd never tell anyone who they should cheer for.

"It's weird to see more anti-Chargers fans attacking Chargers fans than vice versa, than we ever used to fight with the Raiders, which is weird," he said. "I can't believe there's a fan base that actually has 32 NFL teams cheering against them, because you have the former fans. It's not just 31 teams, it's 32."

Former Chargers linebacker Shawne Merriman, who splits his time between San Diego and L.A., was at the game.

"You still have a ton of people down here who love football, even when the NFL is not going on," Merriman said. "They're hungry for football. I was in San Antonio for the opening weekend and it was rocking. It shows you that people love to watch football all year long."

The Alliance, co-founded by Hall of Fame executive Bill Polian and TV and film producer Charlie Ebersol, is the latest alternative league. While others failed, this one has strong NFL connections and is full of players who hope to get a shot at the big time.

The Chargers had a scout in the press box.