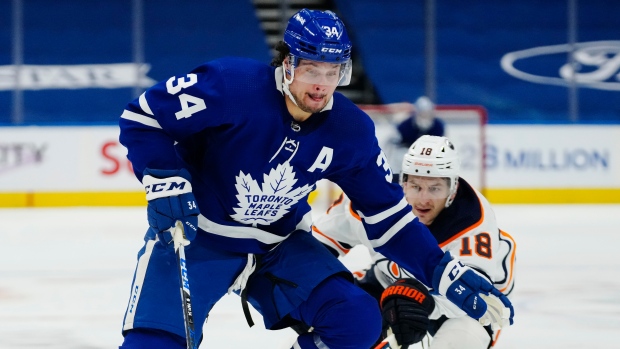 TSN Toronto Reporter Mark Masters reports on the Maple Leafs, who practiced at Ford Performance Centre in Toronto on Tuesday before flying to New York for Wednesday’s game against the Rangers.

The Auston Matthews show hits Broadway on Wednesday night and it could be an historic performance. The Leafs centre has scored in 10 straight road games. If he gets on the board against the New York Rangers, he will match the National Hockey League single-season record streak shared by Steve Yzerman (1988-89) and Pavel Bure (1993-94).

It's supposed to be harder to produce on the road where the opposing coach owns the last-change advantage, but Matthews just keeps on rolling. His shot, skating, hand-eye coordination, physicality and agility have all been evident, but the thing that ties everything together is his high hockey IQ.

"When he's on the bench he's not just catching his breath," noted veteran forward Jason Spezza, "he's thinking about his next play and his next move. He's a little bit like a chess player in that way."

We got a glimpse inside the mind of Matthews on Saturday night. With the Leafs trailing 1-0 and needing a spark in St. Louis, the 24-year-old lined up for an offensive-zone draw against Conn Smythe and Selke Trophy winner Ryan O'Reilly. Instead of trying to win the puck back, Matthews decided to shoot on net, which created a rebound and ultimately a goal for Michael Bunting.

"I know their guy draws inside on his backhand," Matthews explained. "So, I just told Bunts to go to the net and see what happens and was able to get some pretty good wood on it."

"We always try to draw up something quick right before the puck drops," said Bunting, "but this time he just said, 'Hey, go to the net and I'm going to go forward with it,' and he ripped it right off the goalie and it came right to me and I slid it in ... He definitely thinks the game like no other out there."

Matthews and O'Reilly are both winning 55.9 per cent of their faceoffs this season. Matthews, playing on the road, had to put his stick down first. It should've been advantage O'Reilly, but the St. Louis Blues captain was caught off guard.

"It was really smart," O'Reilly admitted during his post-game media session. "When I'm going hard backhand like that, he made a great play. I've got to give him credit ... It was a tough one to eat."

It was the first time Matthews had played O'Reilly and the Blues since Dec. 7, 2019.

"With a play like that and that level of recognition — who you are against, what hand they are, where they're winning the faceoff — to be able to execute on what you are intending to do is great stuff," said Leafs coach Sheldon Keefe. "That is why he is such a major difference-maker."

"You have to have an elite mind," Spezza said of the play. "He's a quick study. He took a couple draws against O'Reilly and figured out what he was doing."

Coming off wrist surgery, Matthews was held off the scoresheet in his first three games this season. Since then, he's registered a point in 25 of 30 games. He's picked up at least one point in 14 of 16 road games.

"They cover him tight on the power play, he'll move and go to different spots," Spezza observed. "Five-on-five, he reads when teams are keeping him to the outside and he tries to get on the inside. And then there's the way he changes the angle on his shot. He's constantly problem-solving."

"The talent, the ability and the athleticism are only a part of the equation," said Keefe. "A sense of where to go and what to do is part of the package. That is why he is in such a rare, special class of player."

"He skates well and gets up the ice," said Spezza of Fox. "He's got a lot of misdirection, that's one of his strengths. He's got a lot of little subtle fakes and jukes. He looks one way and passes the other. Almost the style of an elite point guard like Steve Nash. He's almost like a point guard back there and he can make you miss with your eyes but also has great puck-handling ability and feet."

Fox doesn't have a point in either game against the Leafs this season. Matthews has yet to score in two games against the Rangers although he did produce an assist in the most recent meeting with New York on Nov. 18.

The Leafs just faced the Norris Trophy favourite this season, Cale Makar, during their recent road trip. Matthews scored two goals in Colorado, but the Leafs fell 5-4 in overtime. Makar had a goal and an assist.

"They're both special in their own way, but they're different in terms of how they generate offence," Keefe observed of Fox and Makar. "Certainly, you need to be aware of them, close on them quickly and get the puck out of their hands. In Fox's case especially, it is equally as important that you are aware of where his options are on the ice because he is so good and so smart at finding people. Makar is going to take the puck right through you and shoot it in the net. Fox certainly has those abilities as well, but there are differences in what makes them great."

The Leafs have a defenceman who's more than capable of leading the attack. Morgan Rielly has 17 points in 13 games since Dec. 1. He's tied with Pittsburgh's Kris Letang for the most points per game (1.31) among NHL defencemen in that stretch.

After a two-assist performance on Saturday, Rielly is now on pace for 71 points, which would be one off his career high of 72 set in the 2018-19 season when he finished fifth in Norris Trophy voting.

"If I look at the last two seasons of production, I thought he was capable of a lot more," Keefe said. "A lot of it was just some luck attached to it and some finish for himself and others. When we go through the scoring chances religiously and break it down, Morgan's contribution to our scoring chances has always been off the charts relative to our defence. I don't think it is in a different place necessarily this season, but it is just that the puck is going in a lot more."

"It's a product of a good team game," Rielly said. "When your teammates are playing well and the power play's up there in the standings league-wide, that's bound to happen.

While the Leafs’ power play struggled last season (16th overall, 20 per cent conversion rate), it has been surging most of this year (second overall, 29.7 per cent).

"It's a different outlook," said Rielly, who quarterbacks the top unit. "At the end of last year, we were not exactly red-hot and we came in this year and had a new mentality. We're trying guys in different spots. There's a bit more freedom. It's also partly due to confidence. It's easy to keep rolling once you get rolling."

Eleven of Rielly's 31 points have come on the man advantage. He had 12 power-play points all of last season.

The Leafs’ power play struggled so much last season that rookie Rasmus Sandin replaced Rielly with the first group at one point.

Rielly played a season-high 27 minutes and 41 seconds on Saturday.

"You don’t want to play anybody to that degree, ideally," Keefe acknowledged. "Sometimes you need to lean on people."

Part of the issue on Saturday was that Jake Muzzin was struggling. It turns out there was a good reason why the 32-year-old faded in that game. Muzzin was staggered by a big Klim Kostin hit moments before a goal by O'Reilly in the second period.

"It rocked me pretty good," Muzzin said on Monday. "Definitely startled me the rest of that shift."

Muzzin stayed in and finished the game and then participated in Monday's practice.

"Yesterday, after practice, Jake reported that he wasn't feeling quite right," Keefe revealed. "He took that hit in the game in St. Louis. They were monitoring him for that, but he felt he was okay and good to practice. Through the intensity of practice, he wasn't liking how he was feeling. At this point, he has been diagnosed with a concussion. He is not going to travel with us. He won't be available this week."

Muzzin stayed off the ice on Tuesday and will miss games Wednesday (at Rangers) and Saturday (at the Islanders).

Muzzin's usual partner, Justin Holl, remains in COVID protocol, which means the Leafs are currently without their second defence pair. Youngsters Sandin, 21, and Timothy Liljegren, 22, will look to fill the void while Alex Biega draws in on the third pair alongside Travis Dermott.