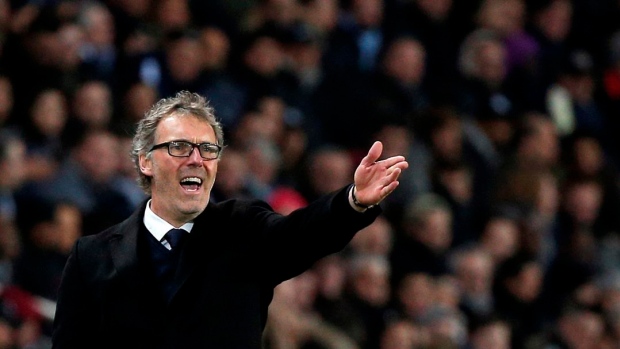 Without giving details, PSG said talks led to an agreement, signed Monday, that "preserves the interests" of both Blanc and the club. Assistant coach Jean-Louis Gasset and physical trainer Philippe Lambert also are leaving.

Sports daily L'Equipe has reported that Blanc will receive 22 million euros ($25 million) in compensation after his three French League-winning seasons where PSG failed to get beyond the quarterfinals of the Champions League.

PSG has been linked with Unai Emery, the Spanish coach who has led Sevilla to three straight Europa League titles.

Despite leading PSG to back-to-back domestic trebles — an unprecedented level of success in the French league — Blanc fell short in Europe. After signing a new two-year deal in February, his future looked in doubt when PSG president Nasser Al-Khelaifi gave an interview to newspaper Le Parisien last month saying changes would be made before next season.

When the club's Qatari owners took charge in June 2011, they made winning the Champions League their priority. But PSG has failed to get beyond the quarterfinals in four straight seasons.

Without blaming only Blanc for that, Al-Khelaifi said in the interview that knew the players were going to lose the quarterfinal return leg against Manchester City because he sensed they lacked motivation.

Al-Khelaifi also spoke in glowing terms about the extreme commitment shown by players from Atletico Madrid — coached by Diego Simeone — in the Champions League final against Real Madrid.

Blanc and Al-Khelaifi also differed over how to deal with controversy surrounding right back Serge Aurier.

Shortly before PSG's home match against Chelsea in the Champions League in February, a poisonous atmosphere enveloped the club after Aurier was suspended for insulting Blanc and some of his teammates in an online video.

Aurier was suspended but returned in time to play against City in April, reportedly against the wishes of Blanc.

Blanc also had a tense relationship with sections of the French media and was criticized after the quarterfinal return leg against City, where he had surprised many by announcing his team was going to play in an untried 3-5-2 formation that backfired completely.

"We put in place a strategy that didn't work," said Blanc, whose other tactical innovation as France coach also failed when he selected two right backs against Spain in the quarterfinals of the 2012 European Championship. "We showed our limitations over the two games."

Striker Zlatan Ibrahimovic, even though he was close to Blanc, criticized the tactics after the game.

Following the deadly attacks in Paris in November that killed 130 people, Blanc appeared insensitive in his news conference one week later. He threatened to walk out when questioned about the psychological state of his players in the wake of the attacks.

Having earlier interrupted one reporter who asked how players who lost friends in the carnage might be affected, Blanc responded angrily when he was asked a similar follow-up question.

"We're not going to talk about this during the whole press conference," Blanc barked, "because I guarantee you, if you ask me one more question about the context, I'll leave."