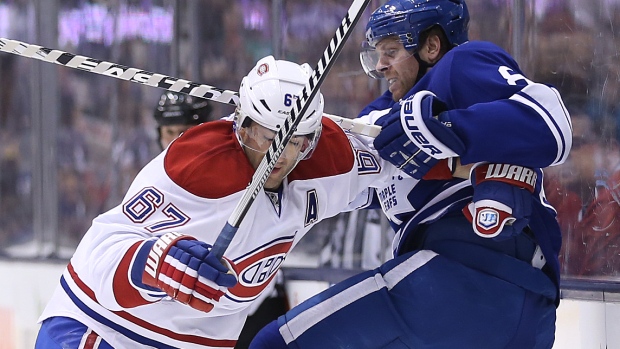 Hockey is back and TSN has you covered across all platforms on opening night.

Then TSN Hockey host James Duthie is live at Maple Leaf Square in Toronto during SportsCentre across the TSN national feeds at 6pm et/3pm pt. He will be joined by analysts Aaron Ward, Jeff O'Neill and Martin Biron as the Maple Leafs host the arch-rival Montreal Canadiens at the Air Canada Centre. The game can be heard live on TSN Radio 690 in Montreal at 7pm et/4pm pt.

And TSN Radio 1040 in Vancouver has puck drop as the Canucks open the season against the Calgary Flames at 7pm pt.

Later, get all the highlights and analysis from all four games with That's Hockey 2Nite on TSN1, TSN3 and TSN GO at 10:30pm et/7:30pm pt.

And all season long, debate and discuss the topics of the day on Hubub.com.