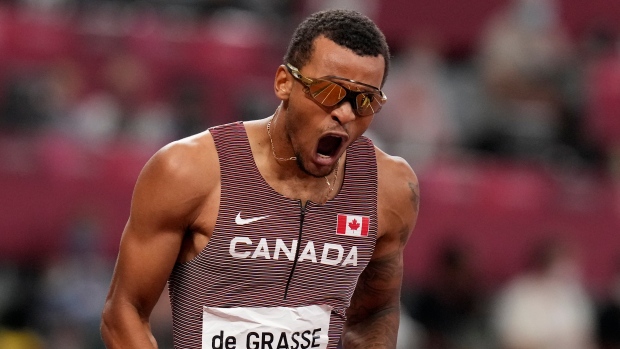 Andre De Grasse entered 2021 with heavier expectations than most of Canada’s Olympic athletes. After winning three medals at the 2016 Olympics in Rio De Janeiro, the Markham, Ont., native was viewed by many as the next big thing in the world of track and field, following the retirement of eight-time Olympic gold medallist Usain Bolt.

The 27-year-old struggled with hamstring and achilles injuries in the seasons immediately following Rio, casting some doubt on his chances in Tokyo. However, when the pandemic-delayed 2020 Olympics began, De Grasse once again proved that he was one of the best sprinters in the world.

Well-rested and injury-free, De Grasse ran a personal-best 9.89 in the 100-metre final to win his second consecutive bronze medal in the event. At the time, it was Canada’s 14th medal at the Games and first by a male athlete.

Up next for De Grasse was the 200 metres, the event in which he famously ran side-by-side with a smiling Bolt in the semi-final, on his way to a silver medal in Rio. Without the Jamaican legend in the field, De Grasse went on the win the gold medal, setting a new Canadian record of 19.62, the eight-fastest time in the history of the event. De Grasse became the first Canadian to win Olympic gold in the 200 metres since Percy Williams in 1928. It was also the first gold on the track for Canada since Donovan Bailey and the 4x100m relay team won at the 1996 Olympics in Atlanta.

“I shocked the world, that’s what I came here to do,” said De Grasse, following the race. “Everyone was saying the Americans are going to win but I came out here and this is my moment. I knew I had it in me.

“Every time I came up short, winning bronze, winning silver, obviously I was young back then, racing the greatest of all time, Usain Bolt. Of course, I was still proud of myself, still happy to be at my first Olympics, but I knew going into my second Games, I was ready.”

De Grasse wrapped up his incredible Olympics by anchoring the men’s 4x100m relay team to a second-consecutive bronze medal, bringing his medal count at the Tokyo Olympics to three.

De Grasse has already begun his preparation for the 2024 Olympics in Paris as he looks to add another gold to his growing trophy case.

"I'm getting excited, I'm getting pumped already to perform there”, De Grasse said in an interview with CBC Sports following the Olympics. ‘I think I'll be there, I'll be still young, I'll be 29 years old there so I feel like I got another shot at another Olympics and to contend for another gold medal."