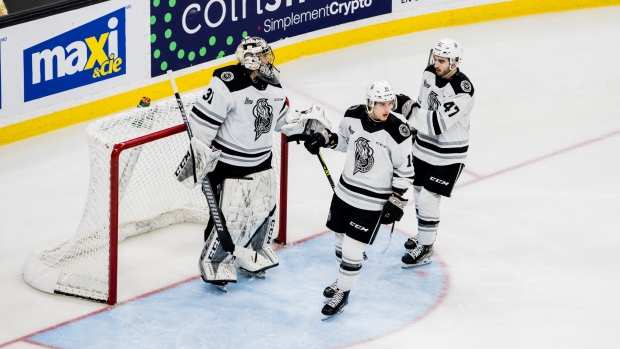 GATINEAU, Que. — Zachary Dean notched two goals and an assist as the Gatineau Olympiques extended their winning streak to five with a 6-2 thumping of the Val-d'Or Foreurs Sunday in the QMJHL.

Antonin Verreault also enjoyed a three-point night for Gatineau (37-15-13), assisting on two goals and scoring one of his own.

Justin Robidas provided the only scoring seen from the Foreurs (25-34-6), giving them both a 1-0 and 2-1 lead in the first period before the Olympiques opened the floodgate and scored five unanswered beginning in the middle frame.

Rémi Poirier made 25 saves to pick up the win.

Gatineau is now 8-1-1 in its last 10 games and is only two points back of the Sherbrooke Phoenix for tops in the Western Conference.

CHARLOTTETOWN — William Trudeau was one of five different Charlottetown (45-13-7) skaters to score and he added an assist in the Islanders' rout of Baie-Comeau (22-34-9). The loss was the Drakkar's fifth in as many games. Francesco Lapenna stopped all 28 shots he faced to pick up the shutout.

BATHURST, N.B. — Alex Mercier scored a power-play goal at the 11:10 mark of the third period that proved to be the game winner as Moncton (28-30-7) held on to beat Acadie-Bathurst (39-20-6). The Titan nearly came back, getting to within one goal on a Ben Allison with 24 seconds left to play, but it proved to be too little too late for them.

SYDNEY, N.S. — Jacob Mathieu scored twice to lead Rimouski (32-24-9) past Cape Breton (14-43-7) in a high-scoring affair. Alexandre Blais and Maxime Coursol each notched two helpers for the Oceanic in the win.

DRUMMONDVILLE, Que. — Lorenzo Canonica assisted on the game-tying goal with 18 second left in regulation and was the only player to find the back of the net in the shootout as Shawinigan (39-22-4) squeaked past Drummondville (28-25-12). The Cataractes, trailing 5-1 to start the third, scored four unanswered goals in the period to tie the game up and sent it into overtime and the shootout.

QUEBEC CITY — Nathan Darveau stopped 47 of the 50 shots he saw come his way but it still wasn't enough as Victoriaville (23-35-7) was overwhelmed by league-leading Quebec (48-15-2). The Remparts outshot the Tigres 51-24 as they consistently peppered Darveau with shots to eventually make him crack.

ROUYN-NORANDA, Que. — Samuel Johnson scored two goals and added an assist as Rouyn-Noranda (28-32-5) doubled up on Chicoutimi (27-34-5). Mathieu Gagnon also had three points with a goal and two helpers.

This report by The Canadian Press was first published April 24, 2022.