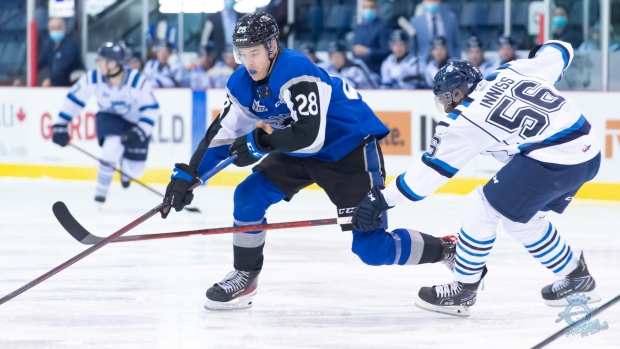 MONCTON, N.B. — Josh Lawrence scored a short-handed goal and also notched an assist as the Saint John Sea Dogs ended their regular season on a 15-game win streak after beating the Moncton Wildcats 4-2 Saturday in the QMJHL.

Lawrence's goal proved to be the game winner and William Dufour scored for Saint John (47-17-4) to end his campaign with a league-best 56 goals.

The Wildcats looked to be mounting a comeback in the third period when Brooklyn Kalmikov scored at the 12:22 mark, making the game 3-2 Sea Dogs, but that would be as close as they would get as a Philippe Daoust empty-netter with less than 30 seconds to play put the game to bed.

SYDNEY, N.S. — Jordan Dumais scored a goal and added three assists as Halifax (38-28-2) hung on to defeat Cape Breton (14-47-7). The Mooseheads scored the game's first five goals over the first two periods, but in the third, the Eagles very nearly came back, scoring four in the frame, including a pair from Cam Squires.

CHARLOTTETOWN, P.E.I. — Xavier Simoneau had six assists and Zachary Roy had four points with two goals and two helpers as Charlottetown (48-13-7) eviscerated Acadie-Bathurst (40-22-6). In a bit of a surprise, the Titan kept starting goalie Joshua Fleming in for all 10 goals as he stopped 26 of the 36 shots fired his way in the loss.

RIMOUSKI, Que. — Zachary Bolduc scored a hat trick and added an assist as Quebec (51-15-2) thumped Rimouski (33-26-9). Théo Rochette also recorded four points in the Remparts win as he scored a goal and assisted on three others.

GATINEAU, Que. — A hat trick from Cole Cormier led Gatineau (39-15-14) past Shawinigan (40-24-4). Cormier also had an assist as the Olympiques came back to win after going down 1-0 early in the first period.

DRUMMONDVILLE, Que. — Brayden Schmitt scored the game-winning goal 37 seconds into overtime and assisted on another marker as Blainville-Boisbriand (30-29-9) edged past Drummondville (28-25-15). Armada netminder Nicholas Sheehan stopped 29 shots to pick up the win.

SHERBROOKE, Que. — Joshua Roy recorded a hat trick to lead Sherbrooke (46-17-5) to a wild win over Val-d'Or (26-35-7). Colin Ratt scored the winner at the 1:53 mark of overtime, which was only required because the Foreurs managed to score two goals to tie the game up at 6-6 within about the last five minutes of the third period.

BAIE-COMEAU, Que. — Jacob Gaucher netted four points with three assists as Baie-Comeau (24-35-9) doubled up Chicoutimi (27-35-6) in an offensive explosion. Benjamin Corbeil scored a pair of goals and added an assist and Isaac Dufort also scored two goals for the Drakkar.