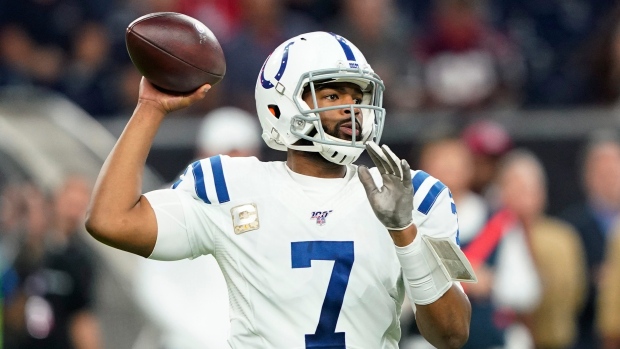 At the Indianapolis Colts’ end-of-season press availability in early January, general manager Chris Ballard laid down the gauntlet for quarterback Jacoby Brissett in no uncertain terms.

"The jury's still out," Ballard said of the 27-year-old pivot, though he still confirmed Brissett as the team’s starter. "That's why we did the short-term deal with Jacoby, to have the security of a player we liked and to find out if he can be the guy."

As far as Brissett is concerned, he is that guy and takes no umbrage with his GM’s remarks.

In 2017, Brissett found himself thrust into the starter’s role when Andrew Luck’s shoulder injury sidelined him for the entire season and veteran Scott Tolzein proved ineffective. This past summer, Brissett again was called into starter’s duty, but for a very different reason: Two weeks before turning 30 and two weeks before the regular season was set to begin, Luck abruptly announced his retirement from the game. As it turns out, Luck wouldn’t be the only high-profile defection from the league in recent months. Five-time All-Pro linebacker Luke Kuechly announced he would not be returning for a ninth season with the Carolina Panthers next week, hanging them up at 27.

“We set all of these goals at a young age and things that we want to accomplish and those guys accomplished those things,” Brissett said. “They feel like they don’t need it anymore and you respect that and you really understand it because it’s their bodies at the end of the day. I know just with sitting and talking with Andrew and learning what went into his reasoning, it became more clear that he was making the right decision for him and his family moving forward.”

With Luck gone, Brissett met with head coach and playcaller Frank Reich to tweak the playbook ahead of the season, something Brissett reveals was an easy transition.

“It was my second year in that offence and not a lot of things – when you watched from when Andrew played – changed,” Brissett said. “Obviously, some players have moved around and things like that, but not a lot changed. We run plays more geared towards what I like and Frank does a great job of game-planning. We’ll have conversations like ‘This play will work’ or ‘This play won’t’ or ‘I like this’ or ‘I don’t like that’ to where the comfortability is at an all-time high during the game.”

Success came early for Brissett and the Colts in the fall with the team starting the season at 5-2 and 14 touchdowns in the first six games for the Jacksonville, FL native. The run was punctuated by Brissett’s starring performance in a Week 7 30-23 win over the Houston Texans in which he threw for 326 yards on 26-for-39 passing and four TDs.

But the good times wouldn’t last. An already battered Colts receiving corps took another hit with T.Y. Hilton missing five games late in the season. Brissett, himself, would incur an MCL strain in a Week 9 game against the Pittsburgh Steelers. The team finished the year on a 2-7 run and Brissett threw for only four TDs in his final eight games.

Still, Brissett – in Toronto as part of the NFL’s Fantennial Challenge – refuses to point fingers at his team’s injuries for his and their regression in the second half of the season.

“We’re in a business of not making excuses, so I’m not going to make any about that,” Brissett said. “It obviously played a part in it, just like with any team – a lot of their key players get hurt and they’ll obviously feel that, too. It didn’t end well [for us], but I think we’re moving in the right direction. Because of the injuries, a lot of other guys got to step up, play and make names for themselves and give us confidence moving forward to attain our goal and what we want to do for our organization. I think we’re on the right track.”

Brissett is heading into the second year of a two-year, $30 million ($20 million guaranteed) contract signed just before last season when he became one of a growing list of high-profile players opting to handle negotiations without an agent.

“Players are putting more thought into those things and diving into contracts fully knowing what they’re doing, what’s at stake and becoming more business-oriented in their lives,” he said of the decision. “Players are intelligent enough to do this, guys like Richard Sherman and Bobby Wagner, who are putting it out on front street and able to lead by example.”

Prior to next season is, of course, the remainder of the current playoffs and eventual Super Bowl. Brissett says he isn’t one of those athletes who tunes out the sport once he’s not longer playing.

“I’ll watch because I have friends on other teams and I definitely have to cheer them on,” Brissett said. “And you know, you’re a fan of the league. In such a competitive league, you play against so many great players and you enjoy watching them – obviously, not when they’re playing against you – and when you get the chance to watch an Aaron Rodgers, a Patrick Mahomes, Jimmy [Garoppolo] and guys like that, you become a fan again and want to see it.”

Brissett will take keen interest in Sunday’s NFC Championship when the aforementioned Rodgers and the Green Bay Packers take on his former teammate Garoppolo, whose success hasn’t surprised Brissett in the slightest.

“Just look at his track record since he’s been in the NFL,” he said of Garoppolo, with whom he played on the 2016 New England Patriots. “He’s played at a high level since he’s come into the league. He’s a great player and a great teammate. San Fran’s got a good one.”

As for that other Patriots quarterback Brissett played alongside, he wants Tom Brady to play forever.

“I hope he plays for as long as he wants,” Brissett said of the impending free agent. “He deserves that right. He’s definitely earned that and every year, he’s played well. He played good football. I don’t think this was a year where you said ‘He’s ready to retire.’ They went to the playoffs, too. I definitely think he’s still playing at a high level and putting his team in position to still win for a very long time.”