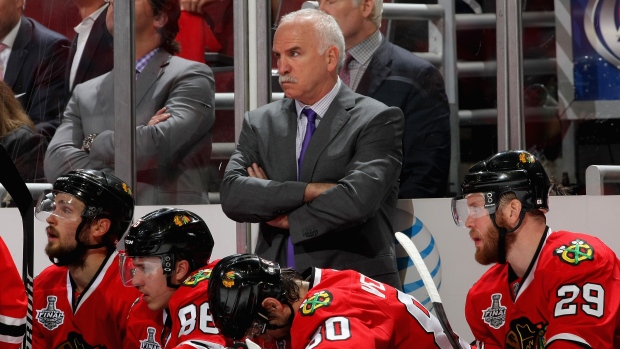 TORONTO — After watching his top centres thrown out of multiple draws, including some at critical moments, Chicago Blackhawks coach Joel Quenneville gave a harsh critique of the NHL's crackdown on faceoff violations.

"Tonight was an epidemic for sure," Quenneville said after a 4-3 overtime loss at Toronto on Monday night. "Right off the bat, I don't know what was the number but I think (captain Jonathan Toews) got tossed about nine times."

Eight seconds into overtime, Toews was kicked out of the face-off circle in his own zone, leaving defenceman Brent Seabrook to take the draw. Meanwhile, Blackhawks defenceman Gustav Forling also lined up for a faceoff when his team was killing a 4-on-3 power play in the second period.

Chicago had 11 players participate in a total of 64 faceoffs, with 18 of those being taken by someone other than an everyday centre. Toews' linemate Brandon Saad went 0-for-8 in the circle.

It wasn't just the Blackhawks who felt it. Toronto centre Nazem Kadri was tossed from the game's opening faceoff and was thrown out from a draw a few seconds later on the same shift. The Leafs had 10 players take at least one faceoff.

Quenneville says the frustrating part about all the violations is the lack of clarity as to why players are being tossed.

"Right now (the officials) don't tell you why, so that's the part... It's tough on centreman, certainly frustration for Johnny, and Kadri was doing the same thing you know.

"I don't think they quite understood the reason why and that's a work in progress, finding out why you're getting tossed without an answer."

The NHL told The Canadian Press in the pre-season that cracking down on face-off violations is about safety and the integrity of game.

The changes do not stem from new rules, but from stricter enforcement of the old ones.

"We just felt we'd let it erode too much and it was time to shore up the face-off procedure, especially the marks in the face-off circles," NHL director of officiating Stephen Walkom said on Sept. 19. "It was becoming unsafe for the linesmen, with (players') feet behind them.

For faceoffs, players must face their opponent squarely and keep their feet behind the lines. It was common for centres to cheat by moving as close as possible to the faceoff dots to gain leverage on opponents.

If a player cheats, he is tossed out of the faceoff and a teammate takes his place. If a team does it twice on the same faceoff, it is given a two-minute penalty.

While numerous players were tossed from draws in the Blackhawks-Leafs game, no one was handed a minor penalty.

The NHL said in the pre-season that it also planned to crackdown on slashing on the hands this season. There were nine slashing minors handed out, including one on Chicago defenceman Jan Rutta late in the third period that led to Toronto's tying goal to force overtime.

— With files from Bill Beacon in Montreal