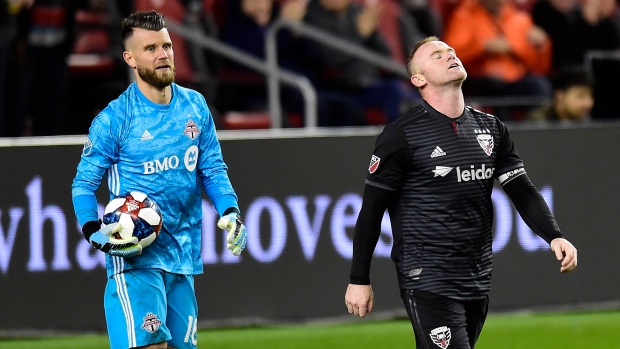 It’s rare for a soccer team to win a game 5-1 and have their keeper be an easy choice for the Man of the Match award, but that was the case following Toronto FC’s first-round, extra-time victory over DC United on Saturday.

TFC advanced to a second-round MLS Cup playoff matchup with NYCFC on the strength of two extra-time goals by Jonathan Osorio and single markers from Richie Laryea and Nick DeLeon, but it was five saves from keeper Quentin Westberg, three of the highlight reel variety, that gave them the chance in the first place.

In the 64th minute of what would turn out to be the final game of his MLS career, Wayne Rooney, whose first shot in the game had already been saved, collected a ball at the top of the box and with a clear look at the goal, fired a shot that Westberg was able to rappel with a diving stop.

Less than 20 seconds later, Rooney had  another chance from point blank range off a cross from Joseph Mora and once again Westberg turned him away, this time using quick reflexes to palm the ball to safety and preserve what was at the time a 1-0 lead for Toronto FC.

Head coach Greg Vanney was impressed with the work of his keeper in the victory, but not as happy with his defence that allowed the chances, especially to the DC United captain, who they were keying in on all night.

“He was positionally excellent, right in the right places, his reactions were fantastic,” said Vanney after the game.  “I was a little more irritated that we leave Rooney in a spot to finish two on us, he’s the one guy we really wanted to know where he was at all times and he got away from us. But (Westberg) made a few saves that were critical on the night, there are no two ways to say it, they were fantastic and critical saves.”

The dual saves on Rooney were spectacular, but Westberg was not finished adding to his highlight reel.

In the 77th minute, Ola Kamara got in alone on the Toronto FC keeper thanks to a turnover in the defensive half, but Westberg was able to hold his position and make a leg save on the breakaway shot to once again keep the score at 1-0 for the home side.

For Vanney, it’s exactly what he’s been expecting all season from his first choice keeper.

“He’s had a great year coming off the back of being in a full season in France and I think we gave him a little bit of a break and rest and I think he’s been excellent since he’s been able to regenerate a bit,” said Vanney.  “He was fantastic tonight with his feet and with his saves.”

After Toronto FC had exploded for four goals in extra time, Westberg put a capper on his night by making another diving save on a Paul Arriola shot in the 115th minute.

The 33-year-old explained that his process was to just keep it simple in denying DC United’s chances.

“Just doing what I do, staying on my feet as long as possible and just reacting to the shots,” Westberg told TSN after the game.  “It’s not the most extravagant way to be a goalkeeper, but it’s my style.”

He was also impressed by the fan support at BMO Field, especially during the extra-time offensive barrage.

“We would’ve loved to finish the game in the 90 minutes, but this crowd? It was probably the best half hour I’ve experience here.  Unbelievable.”