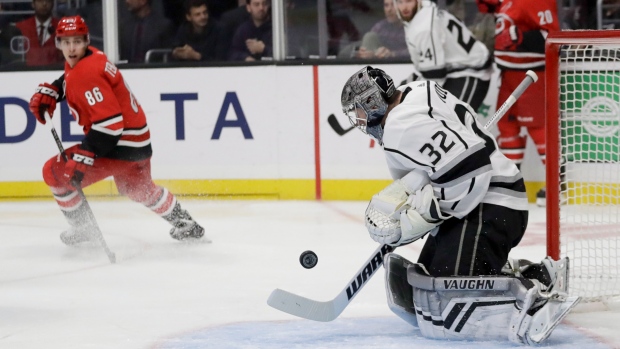 Martinez scored with 2:13 left, Quick stopped 34 shots for his 50th career shutout and the Kings defeated the Carolina Hurricanes 2-0 on Sunday night.

"If anything, you wanted to do it for Quickie because Jonathan Quick was simply outstanding," Martinez said. "I've seen that guy play a lot of really good hockey, and that game was certainly up there. If for nothing else, do it for him."

It was the first win of the season for Quick, who missed 18 games because of two different lower-body injuries. Quick became the 30th goalie in NHL history with 50 shutouts and he leads all American-born goaltenders in that category.

Quick's excellence was on display when Los Angeles had to kill off 1:30 of 5-on-3 play in the third period, as he made saves on shots by Jordan Staal and Sebastian Aho.

Quick also got help from a penalty kill that had allowed 13 power-play goals in the previous 10 games.

"The PK unit did a great job tonight, especially on the 5-on-3," said Quick, who tied Chris Osgood for 29th place in career shutouts. "It takes a lot of courage blocking shots like those guys were doing. We got some clears on the 5-on-3, which was huge because it releases the pressure a little bit."

Mrazek made 33 saves for the Hurricanes, who earned at least one point in five of their previous six games.

It was the first start for Mrazek since Nov. 2 because of a lower-body injury.

"He kept us in there, made some big saves," Carolina coach Rod Brind'Amour said. "The two goalies were kind of going back and forth. We needed someone to make a play, put it in the net, and we're not getting that right now."

Mrazek did his best to give Carolina a chance until the Kings got a late offensive zone faceoff. Anze Kopitar won the draw against Lucas Wallmark, and Muzzin was able to get the puck to Martinez for his second goal of the season.

Mrazek turned aside a one-timer by Jeff Carter during an early power play and denied Tyler Toffoli on a breakaway midway through the first period.

The Kings continued to pile on the pressure in the second without finding a way to beat Mrazek. The Hurricanes had to kill three penalties during the period, with Mrazek able to save a dangerous tipped shot by Dustin Brown.

Even with Mrazek making those saves, the Hurricanes could not capitalize on their own chances against Quick. Wallmark had a look at an open net in the final 10 seconds of the first period but put his shot low into Quick's pads as he scrambled back into position, and Quick was able to smother a backhand by Brock McGinn in the third just more than a minute before Martinez finally scored.

"End of the day, unfortunately, we took a breath at the end and it cost us," Brind'Amour said. "We've got to learn. We're a young group, and young guys making those mistakes, I've got to do a better job on just keep hammering home these points because we can't keep doing this."

NOTES: Kings C Adrian Kempe did not play because of an upper-body injury and is day to day. Los Angeles used 11 forwards and seven defencemen. ... The Kings claimed forward Nikita Scherbak off waivers from Montreal. Scherbak, a first-round draft pick in 2014, has five goals and two assists in 29 career games.