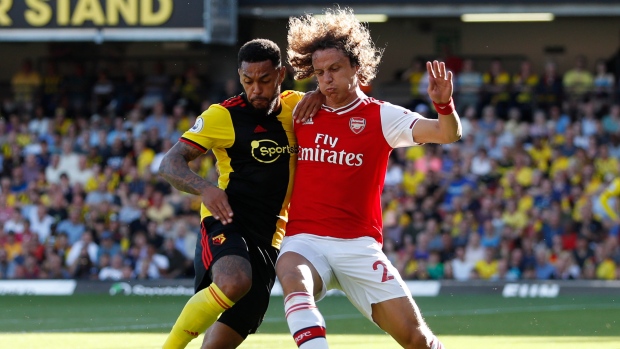 WATFORD, England — Quique Sánchez Flores returned for his second reign as Watford manager and watched his team fight back to earn a well-deserved 2-2 draw against visiting Arsenal on Sunday in the Premier League.

Flores, who left Watford in 2016 but returned to take over from the fired Javi Gracia, was left holding his head as Arsenal goalkeeper Bernd Leno denied Abdoulaye Doucouré what would have been a dramatic winner in injury time.

Pierre-Emerick Aubameyang scored twice for Arsenal but the visitors had no answer to Watford in the second half and will be relieved to have escaped with a point.

Flores' side made the better start but Arsenal scored against the run of play in the 21st minute after Dani Ceballos won the ball with a crunching tackle on Will Hughes. Sead Kolasinac ran forward and passed to Aubameyang, who stopped the ball with his left boot and spun around to fire it in with his right.

It was almost 2-0 minutes later after Ceballos found Mesut Özil, whose cross Aubameyang just failed to reach. Özil was making his first appearance of the season. The former Germany midfielder was the victim of an attempted carjacking before suffering a bout of illness.

Özil showed just what Arsenal had been missing in the 32nd when he split the Watford defence with a brilliant ball to send Ainsley Maitland-Niles though. The Arsenal right-back crossed to give Aubameyang a simple finish for his second goal.

It was the Gabon striker's fifth goal in five league games.

Players from both sides got involved in a fracas at the end of the half, which started when Watford defender José Holebas took issue to a kick from Nicolas Pepé. Matteo Guendouzi rushed in to defend his Arsenal teammate and was duly booked, along with Holebas, who protested long after the halftime whistle was blown.

Arsenal was lacklustre after the break and gifted Watford a goal back in the 53rd, when Leno passed to Sokratis, who attempted a straight ball forward to Guendouzi. Gerard Deulofeu intercepted the ball, which fell to Tom Cleverley to hammer back past Leno for 2-1.

The visitors continued to wobble as Watford's confidence surged. David Luiz fouled Roberto Pereyra just inside the penalty area and the Argentine midfielder dusted himself off to equalize from the spot in the 81st.