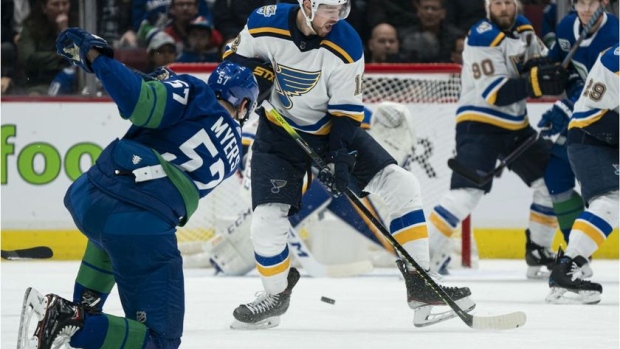 1) Give the St. Louis Blues a ton of credit. All they've done since learning the devastating news that sniper Vladimir Tarasenko is done for the season is win. It would have been easy for the group to sag knowing its path back to the playoffs got significantly more difficult. Instead, the Blues 2-1 overtime victory over the Canucks was the team's fifth straight win and its seventh in the last eight outings. Incredibly, four of their five wins on the streak have been in overtime and all five have been one-goal wins. It looks like they have picked up where they left off last spring as the last team standing in the Stanley Cup playoffs. It's not about blowing out opponents. It's about being battle tested and finding a way to be a goal better than the team on the other side each night. Right now, without their best offensive player, the Blues are finding ways to grind out victories. They may not have been the better team over 63 minutes on Tuesday night at Rogers Arena, but they got a lead, Jordan Binnington made some key stops and their penalty kill frustrated the Canucks top players and never allowed them to get into rhythm. Oh, getting a 3-on-0 in overitme helped, too. The Blues have played 10 one goal games of the 16 games on their schedule so far. They are 7-0-3 now after beating the Canucks.

2) The Canucks have now faced the Blues twice this season and played them tough both times. Incredibly, without holding a lead for a single second through 128 minutes of hockey, the Canucks have managed to scrape together three of a possible four points from those two contests. While they didn't win on Tuesday, the Canucks showed patience and resolve as they have in other games this season. The game against the Blues in many ways resembled Friday's game in Anaheim. The Canucks were all over the Ducks in the first period as they were against St. Louis and yet had nothing to show for their efforts. In both games, the Canucks fell behind 1-0 and trailed by that margin going to the third period. In both instances, it looked like the team might get nothing out of the contest despite playing well for long stretches and outshooting its opponent. There does seem to be a belief in the group that eventually the hard work will pay off and that was the case when Quinn Hughes scored from the left point with under four minutes to play. Sure, the Canucks lost in overtime, so it wasn't a perfect night. But it's another outing where they stuck with things and played the way they wanted to until they found the back of the net. When trailing after two periods this season, the Canucks are an impressive 2-2-2. Last season in that same situation, the Canucks were 5-28-5. So they are managing to hold their heads above water when trailing after 40 minutes. It's not a position they want to be in often, but the ability to comeback speaks to a new found confidence in that Canuck locker room this season.

3) Much of the focus on the Canucks start to the season has been on their offense and understandably so. After being the lowest scoring team in the National Hockey League from Christmas on last season, they are among the lead leaders in offense a month into this season. That firepower has overshadowed what has taken place at the other end of the ice, where even in defeat, the Canucks were sound defensively yet again against St. Louis. Just once in their first 15 games have they surrendered more than three goals. By comparison, at the same stage last season, the team had been torched for five or more in seven of its 15 games. That is a significant turnaround. It speaks to the goaltending the Canucks have had each and every night out this season (save for the third period against Washington). It also shows that the offseason overhaul of the blueline is paying dividends. And the forwards are doing their part, too, spending significantly more time in the offensive zone most nights. Tuesday was the 10th time in 15 outings the Canucks have held their opponents to two goals or fewer. If they continue to do that, they will stay in hockey games and pick up points along the way.

4) Tuesday was the Canucks fifth trip to overtime this season. They are still looking for their first win in the three-on-three session. That flies in the face of everything this team has done offensively so far this season. They have scored in bunches at 5-on-5 and have had success on many nights on the power play, too. You'd think with the upgrade in talent on this year's team that a game-breaker would find a way to score with all the added time and space in overtime. But it hasn't happened yet. They lost on Friday in Anaheim and Tuesday against St. Louis. They have won a pair of shootouts (vs Philadelphia and in St. Louis and also lost a shootout to Washington). But so far, this high scoring outfit has been held at bay in overtime. Tuesday, Tyler Myers had the best chance to score taking a feed in the slot from Tanner Pearson. That was the Canucks only shot on goal in the extra session. Myers, interestingly, was the fourth different Canuck blueliner to see a shift in overtime after Chris Tanev, Quinn Hughes and Alex Edler. Up front, Bo Horvat and JT Miller started the OT period and were followed by Elias Pettersson and Brock Boeser, then Tanner Pearson and Josh Leivo and then Horvat and Miller were out again when the Blues scored the winner. The Canucks ought to look at ways to get the Hughes-Pettersson-Boeser trio out more. Those are the difference makers. Give them more opportunities to end things. Oh, and hit the net in overtime. Nothing good ever seems to happen when a team misses the net on the far side and the puck rims around the boards.

5) Alex Edler stands alone as the penalty king of the NHL right now. He doesn't lead the league in penalty minutes -- that claim, for the time being, belongs to Colorado's Nikita Zadorov -- but Edler is the league leader in minor penalties taken with a dozen. His hattrick of minors on Tuesday didn't hurt the Canucks because they managed to kill all three off. And, in his defense, his third and final penalty of the night may have actually saved a goal and allowed the Canucks the chance to get the equalizer. So not all penalties are inherently bad. Edler was forced to haul down Ryan O'Reilly after a ghastly Tyler Myers turnover in the Canucks zone nine minutes into the third period. So Edler gets a pass on that one. But it's certainly worth monitoring the veteran defender's parade to the penalty box. As the schedule gets busier and Edler continues to shoulder a heavy workload, you wonder if too much is being asked of the 33-year-old as the league gets quicker by the day. On Tuesday, he was whistled for a pair of holding penalties and a holding the stick call. On Saturday in San Jose he was called for another holding penalty and last week in Los Angeles he made two visits to the box for tripping. Edler has taken 12 of the team's 56 minor penalties this season (21.4%). Tyler Myers is second on the team with seven minors. Those two form the top defensive pairing and draw the toughest assignments, so perhaps it's not a huge surprise that they lead the club in penalties taken. But when a player leads the entire league in such a category it can't be ignored. Edler is a valuable part of what the Canucks have going these days -- but he's more valuable on the ice and helping the team than sitting in the box and putting his teammates in a tough spot repeatedly.