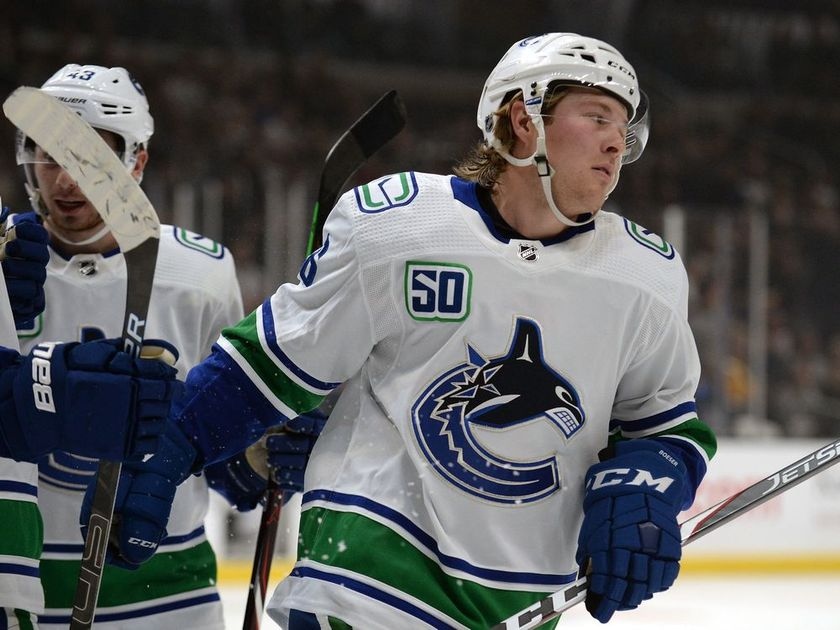 Should Brock Boeser be in the Canucks top 6? 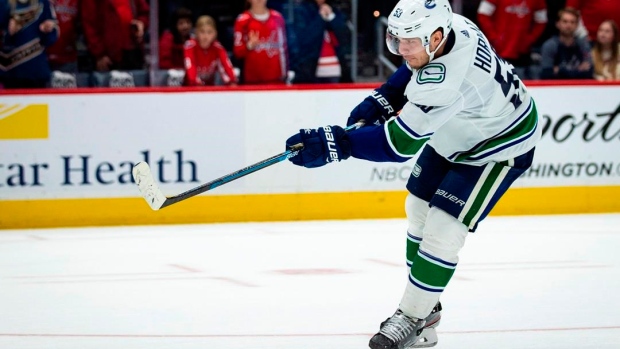 1) Just two days after a spirited team effort in a 2-1 shootout win against a good Capitals team in Washington, the Canucks were clearly the second best team on the ice at Wells Fargo Center in Philadelphia. Despite opening the scoring and taking a 1-0 lead to the locker room after 20 minutes, the Canucks looked like they were skating in mud the rest of the night. They were outshot 17-4 in a lop-sided second period and the third period wasn't much better. Despite the only two power plays of the final two periods, the Canucks managed just eight shots on goal over the final 40 minutes of the hockey game. It all added up to the team being outshot 34-17 on the night -- the 17 shots a season-low for the Canucks by a considerable margin. In fact, it's the second time in three games the team has lowered the bar for shots in a game this season after registering 23 shots in Nashville last Thursday. The Canucks 'Big Four' generated just three of the team's shots on goal on the night with JT Miller scoring on his lone shot on goal, Brock Boeser had a third period chance on the power play, Bo Horvat had one shot on the night and, matched up against Flyers defensive ace Sean Couturier, Elias Pettersson was held without a shot on goal in the hockey game. Jordie Benn accounted for five of the Canucks 17 shots on the night and he hasn't scored since the middle of March.

2) While the Canucks power play exploded for five goals in Nashville last week, Monday marked the third time in four games the team has been held to just a single goal. Bo Horvat scored in Dallas, Elias Pettersson cashed in against the Capitals and JT Miller grabbed a share of the team lead with his 10th goal of the season in Philadelphia. Sense a theme here? All three of those players plus Brock Boeser also scored against the Predators. That accounts for seven of the team's last nine goals. Tyler Graovac also scored against the Preds and Tanner Pearson sealed the deal in Music City into an empty net. Even strength scoring remains a struggle for everyone on the team and secondary scoring has all but dried up over the last week. Earlier in the season, the Canucks were getting offensive contributions from their defensemen and when that halted the likes of Jake Virtanen, Adam Gaudette and Tim Schaller stepped in with timely goals. They could use something, anything during the run of play from Tanner Pearson and Josh Leivo, who continues to work hard but has now gone 14 games without scoring, has just one goal in his last 21 games and only two in 25 games this season. Unless the power play carries the hockey club, the Canucks are struggling to put the puck in the net. Monday was the seventh time in 13 November games the team has managed just a single goal in a hockey game (at ANA, vs STL, at WPG, vs NJD, at DAL, at WAS, at PHI). When more than half the games yield just a single goal, wins will be tough to come by. As a result, it can't be a surprise the Canucks are 4-6-3 in their thirteen contests this month.

3) JT Miller became the third Canuck to reach double-digits in goals this season matching the total of Elias Pettersson and Brock Boeser. Last season, it took until the 33rd game of the season on December 11th for the team to have three 10-goal scorers (Pettersson, Bo Horvat and Jake Virtanen). Miller had just 13 goals and 47 points in a down year in Tampa Bay last season. When he was acquired at June's draft, the expectation was that Miller would play -- and play a lot -- on one of the Canucks top lines and the top power play unit putting him in position to have a bounce back offensive season. He certainly seems to be on that path. His goal in Philadelphia gives him 10+14=24 in the team's first 25 games meaning he's already more than halfway to his point total of last season before the end of November. Obviously, his preseason goals weren't to simply meet his totals from a subpar season, but become a driving offensive force on the West Coast. Miller is in good position to smash his career high for goals (23) and points (58) the year he was traded from the New York Rangers to Tampa Bay at the trade deadline in 2018.

4) Thatcher Demko was easily the best Canucks on the night stopping 32 of 34 Philadelphia shots. It looked for the longest while like he was going to single-handedly get his team to overtime at the very least. But the Flyers kept pouring on the pressure and eventually Philadelphia got the goal it needed from Jakub Voracek with eight and a half minutes remaining to surge in front for good. Five minutes prior to that goal, however, Demko made the save of the night and quite possibly his save of the season when he robbed Flyers defenseman Philippe Myers who had snuck in from the right point and took a centering feed from Joel Farabee. Demko calmly pushed across his crease from right to left and got his glove hand on the puck taking away what appeared to be a sure goal. Demko's job is to make enough saves to keep his team in games and give it a chance to win. Based on that criteria, the 23-year-old was up to the task on Monday. He didn't have much of a chance on either Philadelphia goal and was under siege for long stretches of both the second and third periods. It's another performance in what has been a season full of them so far for Demko that should continue to earn the respect of his teammates and the trust of the Canucks coaching staff. He won't have to wait long to get back in the net with the team almost surely splitting the netminding assignments in the weekend home and home set with the Edmonton Oilers. Look for Demko to get the nod on Sunday at Rogers Arena.

5) With Monday's loss, the Canucks are now 2-2 four games into their longest road trip of the season. The odyssey ends on Saturday in Edmonton (although really with the quick turnaround to a Sunday rematch at home against the Oilers this is essentially a seven-game trip). Before they face the high-flying Oilers, though, the Canucks have to deal with the Pittsburgh Penguins. And while the Pens are missing Sidney Crosby, they defeated Calgary 3-2 in overtime on the other side of Pennsylvania while the Canucks were floundering in Philadelphia. The Penguins have won back to back games and have picked up at least a point in eight of their last nine (5-1-3). So Wednesday won't be easy. But if the Canucks are going to come home from this road trip with three wins from their six games, they have to find a way to grind out a victory in one of the next two contests. The possibility exists that they could get Brandon Sutter back against his former team and there's an outside chance Jay Beagle, who's missed the past two games and five of the last seven, with a lower body injury could suit up, too. Micheal Ferland is expected to join the Canucks in Pittsburgh, but having been in concussion protocol since October 30th and not having had a practice with his team since, it seems hard to believe he would be ready to step back in the line-up. Getting a healthy Sutter back would help the Canucks, but there are no goal-scoring saviours on the horizon. The answers have to come from within and they better appear in a hurry here if the Canucks are to make this a successful road trip.