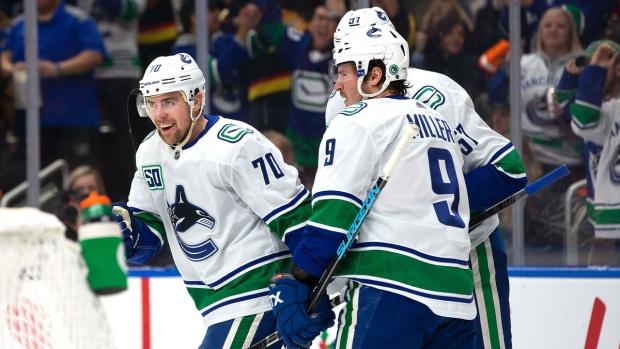 1) The Vancouver Canucks saved their best for last. On the final night of a marathon, six-game, two week long road trip that spanned every time zone in the National Hockey League, the Canucks clearly had a little something left in their tank. It all added up to a workmanlike 5-2 victory in Edmonton in the first half of a weekend home and home with the Oilers that will conclude Sunday in Vancouver. After letting a 6-3 lead get away in Pittsburgh on Wednesday, the Canucks looked determined to put that result behind them early. For the first time since the first game of the month, the Canucks jumped out to a 2-0 lead on goals by Tyler Graovac and Tanner Pearson. They outshot the Oilers 16-7 and announced their arrival in the hockey game with one of their best periods of the road trip. Not even a Connor McDavid goal to get the Oilers on the board and cut the Canucks lead in half spoiled what was a thorough 20 minutes from the visitors. It was clear early on in this one that the Canucks had come to play and that set them up for a big night at Rogers Place.

2) One of the key sequences in the game was a Canucks penalty kill at 2-2 midway through the second period. Tyler Graovac took a high-sticking penalty behind the Oilers net and gave the best power play in the league the chance to go to work. While the Oilers registered three shots with the man-advantage, they didn't really threaten to score. And less than two minutes after the Canucks successfully killed their second penalty of the night, Tanner Pearson scored his second goal of the hockey game putting his team in front for good. On the night, the Canucks not only killed off all three Oiler power plays, but Pearson's first goal of the night came short-handed. The Canucks also scored on the power play to win the special teams battle going away. Edmonton came into the night tops in the NHL with a power play running at 32% and 36.4% on home ice. The Oilers also had the second best penalty killing in the league to start the night. So for the Canucks to win that game within the game went a long way to producing the end result.

3) Travis Green took a lot of heat on social media on Friday when it was first floated that Loui Eriksson may be given the assignment of playing with Bo Horvat to concoct some sort of checking line to counter the Oilers potent attack. The criticism picked up on Saturday when it seemed almost certain the Canucks would line-up in that fashion. On the surface, some of the skepticism seemed warranted. Eriksson had struggled to earn a spot in the line-up on many nights this season and when he did he had been reduced to single-digit ice time -- often watching long stretches of third periods from the bench. Then, at the end of a long road trip and hardly the fastest skater on the team, a player without a single point this season was being asked to play a role in matching-up against the top two scorers in the league. Call it a hunch. Call it a stroke of genius. Whatever it was, there was clearly a method to the coach's madness. Eriksson scored his first goal of the season and outproduced Leon Draisaitl on the night. His line with Bo Horvat and Tanner Pearson combined for three goals and five assists while all finishing in the black in shot shares at even strength. Eriksson played a season-high 15:48 and almost assuredly earned the opportunity to reprise his role on that line again on Sunday night.

4) On Wednesday, Colorado kept McDavid and Draisaitl off the scoresheet entirely. The Canucks weren't able to do that, but they certainly limited the damage with McDavid collecting a goal and an assist while Draisaitl went home empty handed for the second straight game. After those two, the Oilers depth is open to question. On Saturday, it was non-existant while the Canucks depth rose to the challenge. Pearson had a career-high four points (2+2) while Josh Leivo scored for the first time since October 28th. Oh, and we already mentioned Eriksson's first goal in 23 games since March 20th last season and Graovac scoring his second on this call-up from Utica. The Canucks simply could not squander those types of depth contributions. And they made sure they didn't. Saturday was noteworthy because it was the first time all season the Canucks won a game without a goal from any of Elias Pettersson, Brock Boeser, JT Miller or Bo Horvat. It took 27 games, but Canucks depth carried the night in Edmonton. There will be more nights along the way when the Canucks will need those contributions. But after getting a pair of goals from Adam Gaudette and a single from Jake Virtanen in Pittsburgh, it seems there has been an offensive awakening from some of the players lower on the depth chart.

5) When the schedule was released in the summer, one of the things that immediately jumped out at me was the sheer volume of road games in the first two months of the season. Saturday marked the end not only of the team's longest road trip of the season, but also a run of 17 of the first 27 games away from home. The Canucks have come through that stretch above the playoff bar and in possession of the second Wild Card spot in the west. And that's a credit to them. They are 13-10-4 with 30 points and a +9 goal differential at the end of November. More than that, Saturday's victory leaves them with a record of 8-8-1 in those first 17 road games. This is a team that has won 15 times on the road in each of Travis Green's first two seasons behind the bench. They're already more than halfway to that total through 17 games away from home. If they're going to be a playoff team, they'll likely need to finish with close to 20 road wins, so eight victories out the road in the first two months of the season puts them on pace to get close to that. And now, starting Sunday, the Canucks are home for 12 of their next 15 with just three road games in December (at San Jose & Las Vegas on a quick two game trip mid-month and a one off to Calgary right after Christmas).