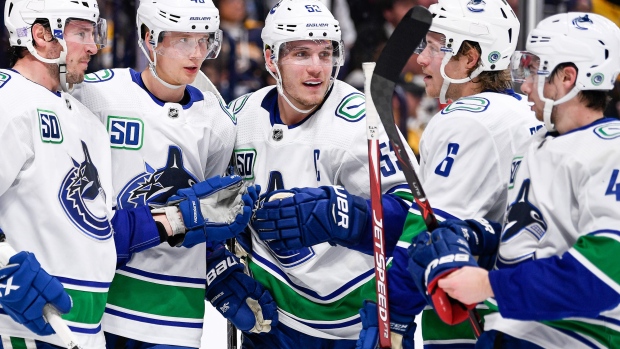 1) It's pretty clear the Nashville Predators are slow learners. A week after getting torched for three power play goals on three opportunities by the Canucks in a 5-3 loss in Vancouver, the Preds continued their parade to the penalty box and the Canucks made them pay once again. Once again, Vancouver cashed in on its first three opportunities of the night and tacked on two more goals with the man-advantage for good measure. In all, the Canucks went five for six and scored their five goals on eight shots and in just 6:24 of power play time. A sneaky part of the team's success was the fact the Canucks went 5 for 6 on power play face-offs and the fact there were only six stoppages with the man-advantage tells you just how potent the team was on the night. To put the Canucks 26 power play goals in 23 games in context, it took the team 43 games last season to cash in 26 times. The five power play goals in a game was the first time the Canucks had achieved that since November 6, 2011 in Chicago. Thursday's performance tops the four PPG the Canucks scored in LA three weeks ago and the pair of three power play goal outbursts the team has also enjoyed already this season.

2) The Canucks best players -- aided greatly by the Preds lack of discipline -- stepped up when the team needed them. Brock Boeser scored his team leading 10th goal of the season, Elias Pettersson and JT Miller each bagged their ninth and Bo Horvat netted his eighth of the season. Miller hadn't scored since a 4-1 loss in Winnipeg and Pettersson's only goals in the previous eight games were also against the Preds when he scored a pair in last week's win. After watching Jamie Benn and Tyler Seguin step up on Tuesday and Nathan MacKinnon before that last Saturday, the Canucks best players had been out-produced by stars on the other side in recent games. That was not the case on Thursday. The Canucks best players seized the opportunity to swing the game in their favour and they did it emphatically with the top-four goal scorers on the hockey club all scoring in the same game for the first time this season.

3) The goals the Canucks scored on the night may not make many highlight shows, but they sure looked good to a team desperately in need of a victory. Pettersson's goal came with Miller standing his ground at the edge of the crease, Tyler Graovac's goal came on a deflection in the slot, Boeser's goal pinballed around off bodies in front of Pekka Rinne. Horvat scored on a rebound. The only power play goal that wasn't scored from the net front was JT Miller's wrist shot off the rush that deflected off the stick of a Preds defender. For the most part, the Canucks relied on the tried and true formula of getting bodies to the net and then finding a way to get the puck there, too. It's how the team generated a lot of its offense early in the season and it certainly worked wonders for the team on Thursday night.

4) The Canucks relied on Jacob Markstrom a little more than they probably should have -- especially in the third period when the Preds outshot the Canucks 22-6. While Vancouver had a seemingly comfortable three-goal lead after 40 minutes, a Matt Duchene goal at 8:31 of the final period brought Nashville within two with plenty of time remaining. And that's when the Canucks netminder reverted to his October form. The Preds went 6-on-4 on a late power play, but couldn't get another puck past Markstrom who tasted victory for the first time since October 30th in Los Angeles. According to naturalstattrick.com, the third period shot attempts (all situations) were 43-5 in Nashville's favour, the scoring chances were 22-4 and the high-danger chances were 8-0. Markstrom weathered the storm and allowed just one goal over the final 20 minutes of play. Canuck goaltenders had been outdueled by their counterparts at the other end of the ice in a number of recent games, that certainly wasn't the case on Thursday.

5) With new look defense pairings after a couple of tough outings against Colorado and Dallas, the Canucks found a way to evenly distribute ice time in Nashville. Alex Edler led the six blueliners -- as he usually does -- with a manageable 23:17 (although that's partly due to the fact he took two more minor penalties). Quinn Hughes was the low-man on the ice time list at 14:52 (and only 2:39 of the final period including watching the final 7:44 from the bench). In between those two, Chris Tanev clocked in at 21:39, Jordie Benn logged 21:00, Tyler Myers played 17:39 and Troy Stecher saw 15:48 of ice time. With four more games out on the road and a tough test awaiting them in Washington on Saturday afternoon, the Canucks helped their cause by spreading the ice time around in Nashville. Instead of leaning too heavily on Edler and Myers and underutilizing their third pair, the Canucks coaching staff handled the defense corps wisely on Thursday. It wasn't a perfect game -- far from it based on the third period and the overall shooting metrics for the night -- but it was a sensible one and one that should provide the template for ice time distribution on many nights moving forward. Defensive depth is supposed to be one of the strengths of this year's team, but it can only be so if all six get a chance to shoulder the workload.