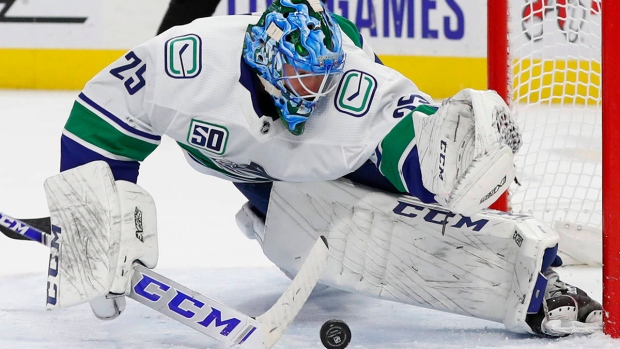 1) Without question, Tuesday was the worst performance of the season for the Vancouver Canucks. Not only were they outscored 6-1, they were outworked by Stars from the top of their line-up to the bottom. Dallas was led by its best players, but its role players had an impact on the game, too. Sure it was Jamie Benn and Tyler Seguin, but it was Taylor Fedun and Justin Dowling, too. A big part of that was because the Canucks allowed the Stars to shine. Look, Dallas is locked in right now and this is no way intended to discount what the Stars did on Tuesday. But let's be honest, they were allowed to do just about anything they wanted to. It hasn't happened often this season, but the Canucks effort over 60 minutes at American Airlines Center simply wasn't good enough. And that's troubling for a team already on a slippery slope in the month of November. Players spoke after practice Monday and again after the morning skate Tuesday about setting the tone for the road trip. They better hope they didn't do that with the clunker against the Stars.

2) The Canucks have completely abandoned the team game that made them successful earlier in the season. In October, they played as a fully-functional unit with forwards coming back to support defensemen and defenders jumping into the rush to provide options and odd-man opportunities. When there were breakdowns, the goalies were there to provide the last line of defence. Now it's five freelancers on many shifts with no semblance of a team game these days. The Canucks are giving up way too many rush chances against and the Stars took full advantage with Jamie Benn opening the scoring after a terrible Vancouver line change left all sorts of open ice for the Dallas captain to walk in on goal untouched. Miro Heiskanen scored a remarkably easy looking goal off the rush early in the third period and Corey Perry salted the game away on a breakaway midway through the final frame. The Canucks start to press, they get away from their systems and their identity and that's compounding their problems these days and making it virtually impossible to compete.

3) Even with the fortunate bounce of an early Dallas goal overturned by an astute coaches challenge, the Canucks didn't get a spark. Instead of being down 1-0 after 90 seconds on the first shot of the hockey game, the Canucks got to hit the restart button, but didn't make the most of the chance to start over. Less than eight minutes into the game, the Canucks fell behind (for a second time) continuing a troubling trend that is costing them hockey games. The game then swung on special teams early in the second period. The Canucks had a 5-on-3 for more than a minute and failed to capitalize. With an odd formation that saw the team use right-hander Josh Leivo over captain Bo Horvat and a non-stop effort to set up Brock Boeser for one-timers instead of putting Elias Pettersson in position to unleash his potent slap shot, the Canucks were unable to tie the game at one. A few minutes later, Jamie Benn cashed in on a Stars power play to put his team up 2-0. While Bo Horvat managed to get the Canucks on the board with his long-awaited first 5-on-5 goal of the season, his team couldn't harness any momentum. Just 2:13 after Horvat made it a 2-1 game, Tyler Fedun collected his own rebound in front of Jacob Markstrom and -- untouched -- buried the puck in the back of the net. If Sven Baertschi wants to stay in the NHL -- and I imagine he does -- he has to make a better effort to get to Fedun on that play. Baertschi coasted on the back check and was too late to get to his man and watched helplessly as Fedun scored his second career NHL goal -- both of them against the Canucks.

4) Jacob Markstrom has had a November to forget. And you have to feel for the guy. Obviously, nothing compares to the loss of his father. And who knows how much that is weighing on him as he tries to play through that pain? But on the ice, November has quickly turned into a miserable month with Markstrom dropping his fourth straight decision in regulation time on Tuesday and falling to 0-4-2 in six starts this month. He has given up 10 goals to Dallas in back to back starts. He'll likely watch as Thatcher Demko returns to the net on Thursday in Nashville. When Markstrom called Thursday 'embarrassing' in his post-game media availability presumably he was talking at a team level although he took his share of responsibility when he said 'you're not going to win many games when you let six goals in.' He's not wrong. He has to be better. It also needs to be pointed out that no team will win often either when it only scores one goal. So it's hardly all on Markstrom. Tuesday's loss was primarily on the shoulders of the leaders of the hockey club. Elias Pettersson had just one shot on goal. JT Miller didn't have any. It has to start at the top, but after a performance like this one there is plenty of blame to go around. No one can feel good about the collective effort put forth against the Stars.

5) So now the challenge gets greater and the mountain gets steeper. The Canucks need a win in a hurry and if it doesn't come Thursday in Nashville, they face the prospect of walking into Washington on Saturday afternoon to face the best team in the NHL. Yikes. The Canucks haven't had to have too many 'bounce back' games so far this season. For the most part, effort hasn't been the issue. But after Tuesday's performance, the team needs to respond on Thursday against the Predators. After many of the team's recent losses, the coaches and players allowed themselves to believe they had played well enough but simply came out on the short end of the scoreboard. And on most of those nights, that was indeed the case. Not Tuesday. Not by a long shot. And now with just one win in eight games (1-5-2), the team has to turn things back in the right direction and the solutions have to come from within. They won't get any injured players back on Thursday. They could swap out a player and insert Zack MacEwen who may provide some energy, but isn't going to solve the team's many problems. No, if there is an answer to be found, it will come from the guys who wore the uniforms on Tuesday, but barely broke a sweat. In some ways, Thursday is a referendum on this team and the direction it is headed. By the standings, the Preds are the weakest opponent the Canucks will face on this road trip. If they don't come away from Nashville with two points -- and that is no guarantee -- you do have to wonder if there's a win to be had on the rest of this road trip.