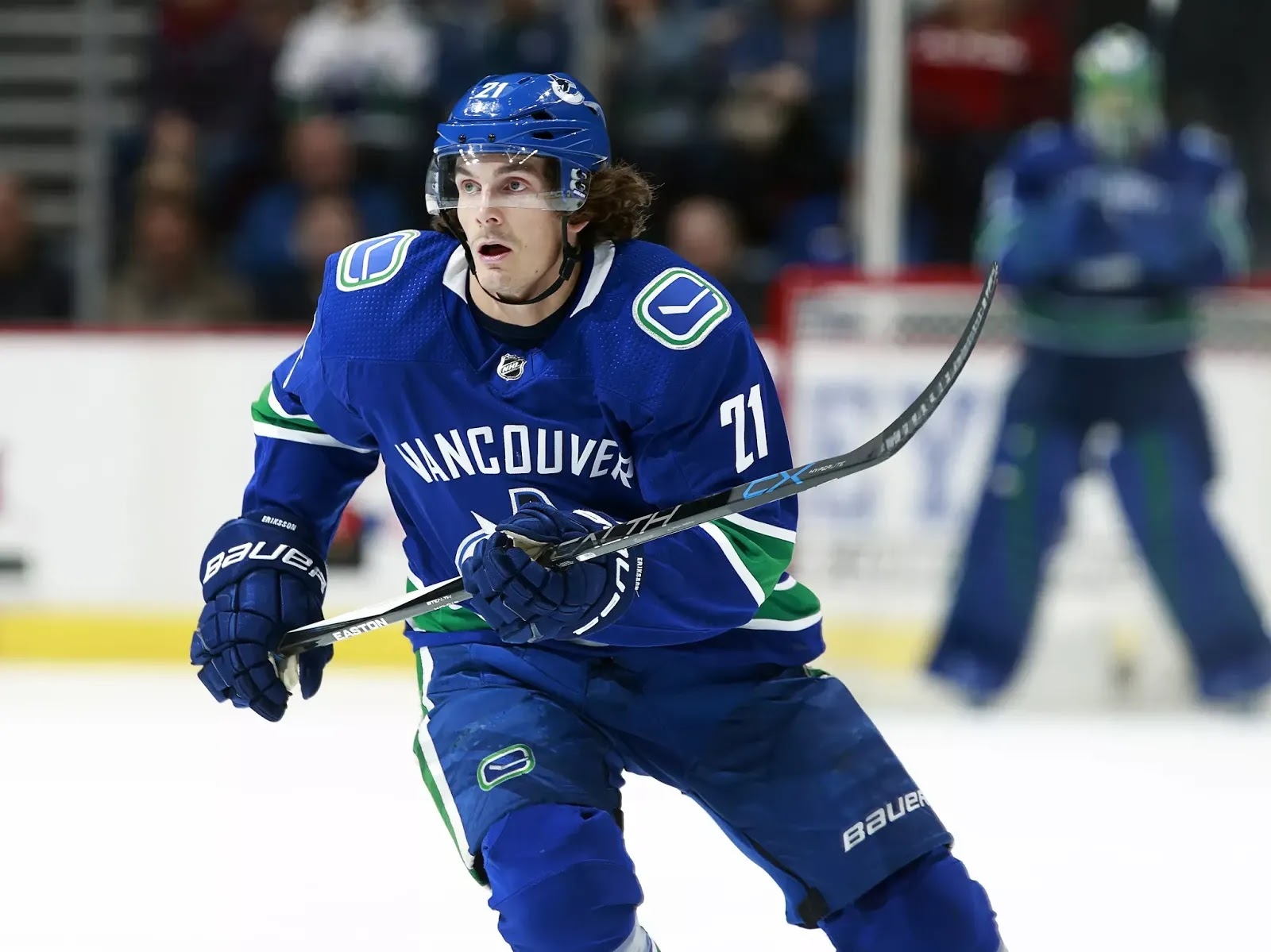 Has Loui Eriksson won you over? 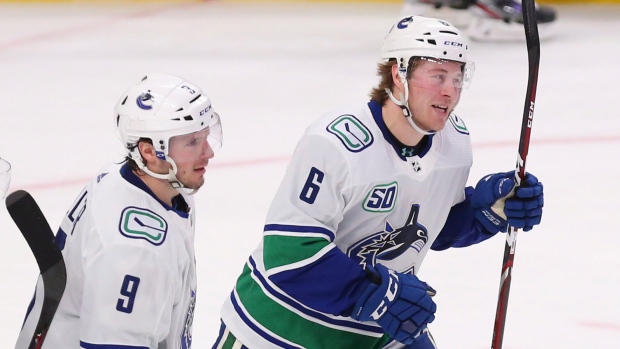 1) It was a weekend of responses for the Vancouver Canucks: collectively as a group, the Canucks needed to respond to all that went wrong in Florida to start the road trip with a pair of lopsided losses. And within the weekend games in Buffalo and Minnesota, the Canucks needed to respond in key moments. They did all of the above backing up Saturday's 6-3 victory over the Sabres with a workmanlike 4-1 win against the Wild. After giving up 49 shots in a 5-2 loss in Sunrise on Thursday, the Canucks surrendered a total of 52 shots over the weekend (28 in Buffalo and 24 in Minnesota). On Saturday, when Buffalo tied the game 3-3 early in the third period, the Canucks answered just 2:56 later on a Brock Boeser goal and then extended their lead to 5-3 a minute and 14 seconds after that when Jake Virtanen scored. On Sunday, when Minnesota scored midway through the second period to tie the game at 1-1, it took just 13 seconds for captain Bo Horvat to put the Canucks back in front with his first of two goals in the game. And 1:13 after that Troy Stecher gave the Canucks some breathing room bumping the lead to 3-1. Hockey is a game of ebbs and flows. Things won't always go the Canucks way as evidenced down in the Sunshine State. But with solid responses under trying circumstances of back to back games on the road with some travel, the Canucks tightened things up defensively, got timely goals and goaltending and have now won 9 of their last 11 games.

2) Travis Green rolled the dice going with Jacob Markstrom in both games over the weekend. Markstrom was solid in Buffalo and wasn't taxed too heavily, so it wasn't like he was coming off the 49-save performance against Los Angeles on December 28th the last time the team had back to backs. Still, there was a risk that Markstrom's heavy workload might catch up to him as he started for the 14th time in the team's last 16 games on Sunday. Markstrom couldn't have asked for a better start as the Canucks limited the Wild to just three first period shots on goal and none over the final 8:58. On the night, Markstrom stopped 23 of 24 Minnesota shots and wasn't really tested until the final six minutes when the Wild pressed to get back in the hockey game. That's when Markstrom was at his best. He made three terrific stops late in the game that prevented the Wild from getting any closer than 3-1. After getting Thursday night off in Sunrise after getting shelled in Tampa on Tuesday, Markstrom looked like his old self over the weekend and provided the kind of goaltending the Canucks need to win hockey games. Thatcher Demko needs to get some action again soon (just two starts and one relief appearance in the last 16 games) especially with Markstrom making an additional road trip for the All-Star weekend in St. Louis at the end of next week. The Canucks will have to monitor their main man's workload, but that's an issue for another day because Travis Green made the decision to go with his Number One netminder in both games this weekend and with a pair of wins, it looks like the coach made the right call.

3) It was a choppy -- and at times chippy -- game on Sunday afternoon. The Canucks had a season-high eight power plays while the Wild had five chances to work with the man-advantage. If you didn't see the game, you might think it was nothing but a special teams fest, but there were so many overlapping penalties in the first 10 minutes of the second period it was hard to keep track of the sheer number of opportunities for both teams. On the night, the Canucks had five conventional (5-on-4) power plays, a pair of 5-on-3 opportunities and a 4-on-3 power play. After the game, Elias Pettersson, who opened the scoring with a deft deflection for his 21st goal of the season on a second period power play, lamented the fact it was tough to get any flow or rhythm going because so many of the power plays were interrupted with more penalties. It wasn't a night where there were long stretches of prolonged power play pressure as each team cut their own power plays short by taking penalties to negate the man-advantages. The Canucks power play has just one goal in the past five games -- but it turned out to be a big one for the Canucks as it got the ball rolling on Sunday.

4) Bo Horvat is playing his best hockey of the season -- and it's a stretch that dates back to just before Christmas. Horvat scored and added an assist on Saturday in Buffalo and followed it up with a two-goal performance on Sunday. He now has 5+7=12 in the past seven games and has six of his 15 goals on the season in the past nine games. What's been the key to the captain's offensive outburst? It's easy to suggest that in some bizarre way Loui Eriksson is the guy that has unlocked Horvat's offense. And give Eriksson credit for his role in all of this. But more than it being Eriksson in particular, Horvat pointed to the fact that he has had consistent linemates over a 10-game stretch for the first time in a couple of seasons. When Josh Leivo went down with a fractured knee cap on December 19th against Vegas, Travis Green inserted Eriksson on a line with Horvat and Tanner Pearson for the club's next game against Pittsburgh. It was a makeshift match-up line designed to keep an eye on Evgeni Malkin. That trio performed well reasonably well that night against the Penguins and have remained intact ever since. Where Horvat had gone a season and a half with his linemates in a constant state of flux, changing from night to night and period to period, suddenly he's finding a groove with the same two guys on a nightly basis. And it's showing in his confidence level and his offensive contributions. In the 10 games they've been together, Horvat leads the team with 13 points, followed by Pearson with 12 and even Eriksson has found a way to contribute with three goals and two assists. There is something to be said for chemistry. Just ask the captain.

5) Sunday's win in Minnesota was the Canucks 25th of the season in their 46th game (25-17-4). They didn't reach the 25-win mark last season until a February 9th victory over Calgary in the team's 56th game of the season. So they are well ahead of last year's pace as they head to Winnipeg to wrap up this five-game road trip on Tuesday. The victory over the Wild boosts the Canucks point total to 54 on the season. If we use 94 points as the projected number to qualify for the playoffs, the Canucks now require 40 points to get there with 36 games remaining. They can do so by winning half of the games left on their schedule. A run of 18-14-4 would see them collect the necessary points to get to reach that total of 94. Considering they have 19 of those 36 games remaining at Rogers Arena where the team has won six straight, nine of its last 11 and is 14-5-3 on the season, amassing (at least) an additional 40 points seems well within the Canucks grasp. Nipping losing streaks of any significant length in the bud as they did this weekend will go a long, long way to helping the Canucks achieve that goal of qualifying for the post-season.