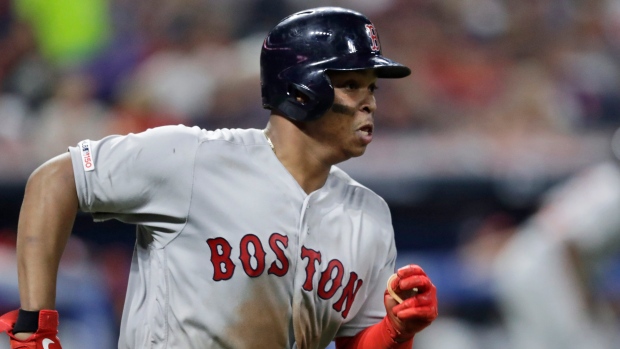 FORT MYERS, Fla. — His baby face and near constant smile may make him appear younger than his 23 years.

But third baseman Rafael Devers already has parts of three seasons and a World Series championship on his resume. And after finishing 12th in American League MVP voting in his breakout 2019, the Red Sox believe Devers hasn't approached his ceiling yet.

Devers hit .311 with 32 homers, 115 RBIs, an AL-leading 54 doubles, and a major league-leading 90 extra-base hits last season. He led the Red Sox in games played (156), hits (201), and average. With the departure of Mookie Betts in a trade to the Los Angeles Dodgers, Devers will be an even bigger part of Boston’s offence this season.

“Especially as much as he’s improved his game defensively, he’s a huge part,” said manager Ron Roenicke. “The bat is good because of especially where it plays in the lineup and how we can push that lineup deeper makes it tough to pitch to us.”

Roenicke expects to bat Devers second this season, behind likely lead-off hitter Andrew Benintendi, where Devers had much of his success last season after taking over the spot in late June.

“Wherever the team feels I should be batting in the lineup, I’ll do whatever they say,” said Devers, who made his 2020 spring debut Friday. “But obviously I had a lot of success batting in the two hole last year. It’s not going to change my approach either way. I’m going to still do what I have to do, go out there and work hard."

From May through August, there weren’t many hitters hotter than Devers last season. How much more can Boston expect from him offensively?

With Betts gone there will be big expectations for Devers. Former Red Sox slugger David Ortiz, though, only needs Devers to do what he did last season.

Devers knows what will be expected of him this season. But, he’s not feeling pressure to replace Betts, the 2018 AL MVP.

“I don't feel any pressure at all," he said. "We have a great team. We have a lot of talent on this team. We have (Alex) Verdugo, we have (Benintendi), we have (Xander) Bogaerts, and J.D. (Martinez). There’s a bunch of guys that we have. So, we know we have to step our game up. So, obviously with Mookie because we know he’s a superstar but we don’t feel any pressure because we know the type of team we have and we’ll be ready for this coming season.”