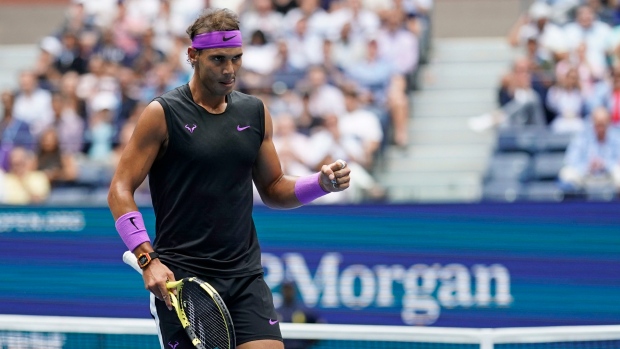 Canada's Denis Shapovalov has reached a career-high 15th in the ATP Tour rankings after advancing to the final of the Paris Masters on Sunday.

The 20-year-old from Richmond Hill, Ont., jumped 13 spots in the rankings released Monday.

Shapovalov advanced to the Paris final after Rafael Nadal retired from their semifinal with an injury.

The Canadian went on to lose 6-3, 6-4 to top seed Novak Djokovic in the final.

Shapovalov is finishing the season strong after an up-and-down campaign that included a significant mid-season slump. He picked up his first career win last month at an ATP 250 tournament in Stockholm.

Montreal's Felix Auger-Aliassime, who is out with a left ankle injury, dropped two spots to No. 21, while Milos Raonic of Thornhill, Ont., held steady at No. 32.

Brayden Schnur of Pickering, Ont., jumped six spots to 93 after advancing to the final of a Challenger event last week in Charlottesville, Va., where he lost to fellow Canadian Vasek Pospisil.

Vancouver's Pospisil, who returned to action this season after undergoing surgery for a herniated disc, moved up 21 spots to No. 153

Despite withdrawing from the Paris semifinals, Nadal moved back into the No. 1 spot for the first time since November 2018.

The 33-year-old Spaniard has become the second-oldest No. 1 player. Roger Federer led the rankings at the age of 36 last year.

Nadal has been No. 1 for 197 weeks through eight different stints at the top. Federer leads the all-time list with 310 weeks.

Federer stayed third in the rankings, behind Djokovic and ahead of Daniil Medvedev.

Nadal has a 51-6 record and has won four titles this season, including the French Open and the U.S. Open. He also reached the Australian Open final.

He is looking to seal the year-end top ranking for the fifth time.

This report by The Canadian Press was first published Nov. 4, 2019.