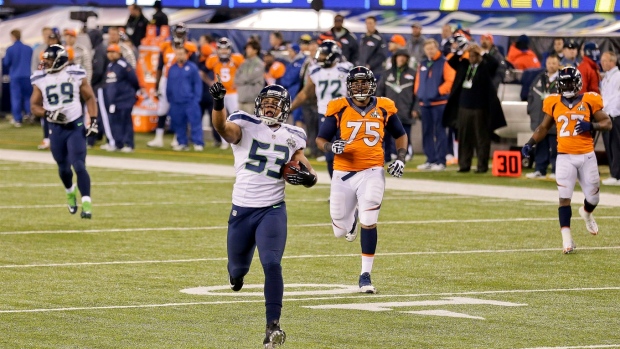 A person with knowledge of the deal said the team is finalizing the deal with Malcolm Smith on Tuesday night. The person spoke on condition of anonymity because the deal with the former Seattle linebacker has not been signed.

A second person, also speaking on condition of anonymity, said Lee Smith has agreed to a $9.1 million, three-year contract to leave Buffalo for Oakland.

A third person, also speaking on condition of anonymity, said Helu agreed to a two-year deal worth a little more than $4 million.

Those deals were first reported by ESPN.

While the Raiders went into the off-season with hopes of signing some of the top playmakers like Ndamukong Suh and Randall Cobb, they started free agency by signing some lower-tier players.

Malcolm Smith, who has played mostly outside linebacker in his four years with Seattle, could fill a void at middle linebacker for Oakland that was created when Nick Roach had a season-ending concussion in an exhibition game last summer. Roach was released last week. Miles Burris struggled in his place.

Smith won the Super Bowl MVP in 2014 when he returned an interception for a touchdown, recovered a fumble and had nine tackles in Seattle's 43-8 win over Denver.

Smith started only five games and played less than one-third of the defensive snaps for the Seahawks this past season and was deemed expendable. But Raiders defensive co-ordinator Ken Norton Jr. was Smith's position coach in Seattle and gave a positive report for Oakland to sign him.

Lee Smith had 20 catches in four seasons with Buffalo but is considered a strong blocking tight end to complement Mychal Rivera in Oakland.

Helu ran for 216 yards on 40 carries for Washington last season and is an excellent receiver out of the backfield. He caught 42 passes for 477 yards and will give versatility to Oakland's backfield alongside Latavius Murray.

Hudson was rated by Pro Football Focus as the third best centre in the NFL and should upgrade a running game that was last in the league in rushing in 2014.

The move to sign Hudson means the Raiders will cut ties with incumbent centre Stefen Wisniewski, who is also an unrestricted free agent. Wisniewski was a second-round pick in 2011 when late owner Al Davis still ran the team.

He was a solid player in four years, starting 61 of the 64 games, but McKenzie and new coach Jack Del Rio chose to go in a different direction.

Hudson was picked seven picks after Wisniewski in the 2011 draft at 55th overall. After playing mostly as a reserve as a rookie and being limited to three games his second year by a broken right leg, Hudson emerged as one of the top centres in the league the past two seasons. He started 31 of 32 games and helped lead one of the NFL's best rushing attacks.

This is expected to be a busy off-season for the Raiders, who are coming off a three-win season that cost coach Dennis Allen his job four games into the campaign. Oakland chose to hire Del Rio instead of retaining interim coach Tony Sparano and is hoping to build on a foundation featuring last year's top two draft picks: linebacker Khalil Mack and quarterback Derek Carr.

Oakland still would like to find a play-making receiver to help Carr's development, a right guard to fill the spot vacated when Austin Howard was moved to tackle, a pass rusher, secondary help and possibly another tight end.