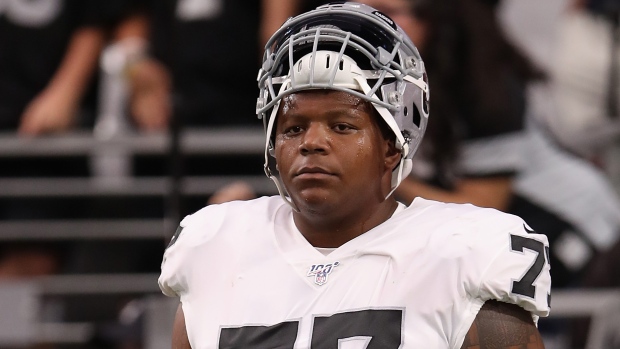 ALAMEDA, Calif. — Oakland Raiders tackle Trent Brown has been sued by his ex-girlfriend for what she says were multiple acts of domestic violence over the past year.

Diorra Marzette-Sanders filed a civil suit in Alameda County Superior Court on Tuesday accusing him of several attacks that left her bloodied, bruised and fearing for her safety.

According to the lawsuit, Marzette-Sanders accused the 6-foot-8, 380-pound Brown of slapping her, hitting her and choking her at different times and threatening to shoot her in the "head before you walk out that door with my son."

"I am aware that my ex-girlfriend has filed a civil suit against me," Brown wrote on Twitter on Wednesday. "I deny the claims. They are false. I believe in the court system where I will clear my name. I will not be making any further comment at this time."

Marzette-Sanders said the two began dating in March 2017 and had a son together last January. She said the two had a "non-marital partnership agreement" and she moved around the country to be with Brown before he kicked her out of their home in Texas in June.

Marzette-Sanders is requesting a jury trial and is seeking unspecified compensation, including punitive damages.

Raiders coach Jon Gruden said the team was aware of the suit and was looking into it. He had no further comment.

An NFL spokesman said the league would take the matter under review.