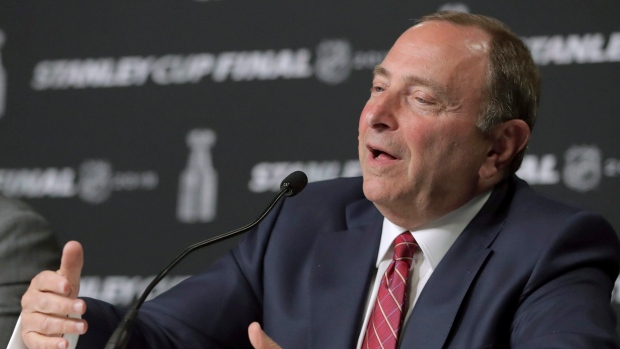 Two separate but inextricably linked negotiations have bogged down the National Hockey League’s announcement on hub cities and fixed dates as hockey marches toward a return to the ice.

The first involves the details on the hub cities, the multi-layered safety protocol, testing, and bubble/lifestyle restrictions, as well as training camp procedures.

The second revolves around an extension to the Collective Bargaining Agreement – a near financial and economic prerequisite to return to play given the lost revenue as a result of the COVID-19 pandemic. The players owe the owners hundreds of millions of dollars because they are responsible for a 50-50 revenue split and have already been paid 90 per cent of their compensation for the season.

It is unclear whether one negotiation can be completed without the other.

Time is of the essence. Players are due more than $446 million in signing bonuses as scheduled for Wednesday as part of the 2020-21 calendar.

Both the NHL and the NHL Players’ Association have kept details closely guarded.

But New York Rangers star and Hart Trophy candidate Artemi Panarin raised eyebrows last Thursday when he posted a statement on social media voicing his concern about the “long-term prosperity of the NHL.”​

“I have concerns not only about the health of players but also about the long-term prosperity of the NHL,” Panarin wrote. “For nearly two decades, the Players have protected the owners [sic] income with escrow, including throughout this pandemic process, even as owners’ equity continues to grow. It is time to fix the escrow.

“We as players cannot report to camp without already having an agreement in place.”

Vegas Golden Knights defenceman Brayden McNabb was the latest to echo that concern in a Zoom call with reporters on Monday night, saying escrow is a "big issue" and there is "still a lot to iron out."

A simple majority vote is required by the NHLPA’s full membership to ratify any proposal, but the vote will reportedly include both the CBA extension and the return-to-play specifics lumped together.

Neither side in the negotiation was willing to confirm or deny any specifics, but here are the details believed to be on the table:

- The new CBA extension could be three years with an option for a fourth year. The current CBA has two more full seasons to play, which would guarantee hockey labour peace through 2024-25.

- The latest proposal involves a frozen salary cap upper limit for each of the next two full seasons at $81.5 million, followed by a one million per year increase in each of the subsequent two seasons.

- With the salary cap remaining frozen, it would be de-linked from revenue projections for the first time in the cap era.

- Escrow would likely be capped at 20 per cent for the 2020-21 season, followed by a sliding scale which would reduce the escrow percentage withheld annually from 18 to 14 per cent.

- Players would also agree to defer 10 per cent of their salary in 2020-21, to aid owners in liquidity, which could be returned potentially over a number of years.

- The NHL’s owners would be repaid in full for the players’ share of lost revenue as a result of the pause during the pandemic.

In order to illustrate what those terms might mean for both sides, a few assumptions must be made. The disclaimer is that these numbers, which have changed frequently throughout the negotiating process, may not be fully accurate but are for illustration purposes.

The total revenue lost if the 2019-20 season is not completed is reportedly $1.1 billion. That number helps explain the NHL’s motivation to return. Players are on the hook for half of that number, or upwards of $550 million, to repay to owners.

If this season is able to be completed, the potential maximum amount of revenue to be recouped is believed to be $450 million. Getting half of that would allow the players to repay, at most, $225 million to owners, which would leave the total amount owing by the players at $325 million heading into next season.

A reconfiguration, or extension, of the CBA is required because the current contract states that the total amount owing must be taken off of the following year’s salary cap.

Given that there is no way to know whether arenas next season will be empty, half-full, full, or somewhere in between, one 2020-21 revenue projection is $2.5 billion.

That amount is roughly half of last season’s normal projected revenue, which was around $5 billion. If that $2.5 billion projection is accurate, that means the NHL and/or NHLPA are roughly calculating that arenas will be one-third full, based on a typical season’s gate receipts.

So, if revenue next season is $2.5 billion and the salary cap remains frozen, how will the NHL’s players repay the owners?

That is the $325 million-dollar question.

The truth is that it will take a number of years with significant growth in league revenue, while the salary cap remains frozen with no room for player salary growth or cap space to sign new contracts, in order to pay off the debt.

In fact, if the salary cap is frozen at $81.5 million next season and revenue is indeed $2.5 billion, then the NHL’s players would actually add to the amount owed to owners because their total compensation ($2.4 billion) would nearly equal the league’s total revenue, when the players' allowable compensation share is only $1.25 billion.

Somewhere between $600 to $700 million would be added to the players’ balance owing, ballooning the amount due to owners to north of $1 billion.

It would then take the following years of the agreement with a flat cap – and most importantly, revenue to return to normal and continue to grow starting in 2021-22 – for the players to pay off that $1 billion loan through escrow deductions some time during the 2023-24 season.

The exact amount of time required to pay the loan off is dependent on revenue. These numbers have been offered to illustrate the long road ahead for players.

With that information, it leaves a series of questions to be answered:

- Why are players being asked to repay their 50-50 share of lost revenue when using the escrow system was clearly not the intention of the parties to the CBA to handle an unexpected pandemic? The escrow system was created in 2005 as an adjustment tool to ensure a 50-50 split by a couple percentage points in either direction based on normal course of business projections, not as a vehicle of self-insurance against business loss for owners.

- Why are players still being asked to repay that debt when owners have received (or will receive) a total of $1.1 billion in expansion fees between Vegas and Seattle? That NHL says that money is exclusive of the players, but half of that would easily help cover the amount owing after this season.

- What if league revenues don’t bounce back? The mantra from owners in previous CBA negotiations was that they assume all of the risk as business owners. That is not the case here. The players assume all of the risk because if revenues do not recover, then it only extends the term of the loan that they have to repay owners. Yes, the incoming Seattle franchise will add revenue, but it also adds another team of salary to pay out. Plus, the next American national TV rights contract should help, but half of that revenue automatically goes to owners.

- With the players assuming that risk now, would owners be willing to guarantee specific revenue projections? In other words: Deem that hockey-related revenue will not be less than $X dollars when calculating escrow.

- Why are players, who have a huge debt owing, willing to loan the owners money in short order next season with a salary deferment to increase their liquidity? Yes, player compensation next season may match total league revenue, putting a strain on owner chequebooks, but owners have enjoyed record revenues year after year, have access to extraordinary league-organized credit facilities, plus franchises are valued at record high levels and borrowing rates are at all-time lows. Plus, it seems odd that a group owing so much money would be making a loan in the first year.

- Where is the upside for players? Yes, labour peace is important, and players may earn a much-requested cap on escrow to make the pain more palatable. They may also ‘win’ a defined international hockey calendar, including a guaranteed return to the 2022 Winter Olympics. But the salary cap will remain frozen for a number of seasons, the full escrow cap withheld has no prospect of being returned since there is a debt to pay, and both unrestricted and restricted free agents will be squeezed in their next contracts, including young players coming off entry-level deals. Teams will have no cap space because, by the nature of escrow, GMs will know that they are really spending 80-cent dollars with 20 per cent escrow coming back to the owners/teams.

- But perhaps the most important question is this: Is Panarin’s vocal angst a one-off among players, or is it the tip of the iceberg?