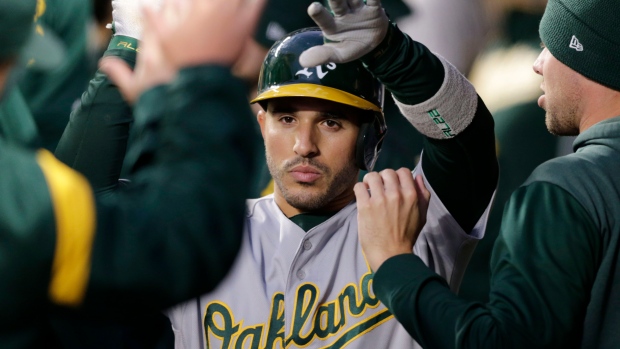 OAKLAND, Calif. — Oakland Athletics centre fielder Ramon Laureano had a six-game suspension reduced to four games Friday after appealing the penalty for his role in a benches-clearing brawl with the rival Houston Astros.

Major League Baseball said a settlement had been reached and the A's were informed of the decision. Laureano was set to begin the four-game suspension Friday night and will miss a three-game weekend Bay Bridge Series against the San Francisco Giants. After sitting out Monday at Arizona, he will be eligible to play Tuesday against the Diamondbacks.

“We're only down four games with him and he's able to work out before, just can't be around the team during the game,” manager Bob Melvin said. “Any kind of reduction we would have been happy with. It's just something we have to deal with at this point.”

Mark Canha, who filled in for an injured Laureano in centre field for a stretch last season, started for the AL West leader in centre Friday at San Francisco.

Astros hitting coach Álex Cintrón received a 20-game suspension and a fine Tuesday for his role in the fracas at Oakland last Sunday. Laureano also received a fine.

Cintrón’s suspension is the longest for an on-field transgression in 15 years, since Texas pitcher Kenny Rogers received 20 games for his altercation with two cameramen in 2005.

Laureano was hit by a pitch from Humberto Castellanos with one out in the seventh inning of Oakland’s 7-2 victory — the third time he got hit in the series and the fifth time overall for an A's batter. Houston players weren't plunked at all. He pointed at Castellanos and began exchanging words with a gesturing Cintrón then left first base, threw down his batting helmet and began sprinting toward the 41-year-old Cintrón.

Astros catcher Dustin Garneau tackled Laureano before the A’s outfielder got to the hitting coach. Laureano is a former Astros player and the rival clubs have been the top two teams in the AL West the past two years. A’s pitcher Mike Fiers, another former Houston player, revealed the Astros’ sign-stealing scandal in November to The Athletic.

Melvin might experiment with his batting order during Laureano's absence and feels fortunate to have some outfield depth.

“But it's always tough to lose a guy like him," Melvin said.