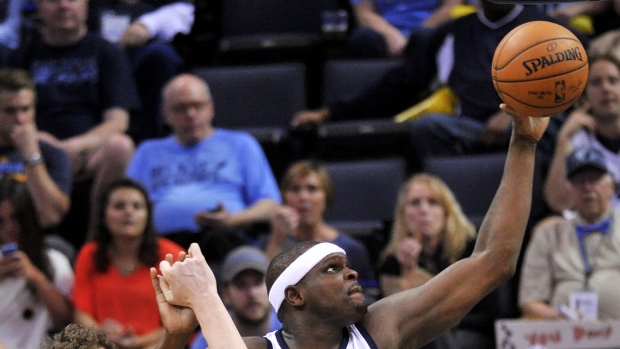 MEMPHIS, Tenn. - The Memphis Grizzlies looked like their old selves — controlling the inside, relying on their defence and emphasizing tough, hard-nosed play.

The result was a 110-74 victory over New Orleans on Wednesday night, the Pelicans worst loss of the season.

All three of the Grizzlies front-line starters — Zach Randolph, Marc Gasol and Jeff Green — scored 15 points, converting a combined 19 of 36 shots. Randolph and Gasol each had six assists, and Randolph added 13 rebounds and Gasol eight.

"The effort was there," Gasol said. "The communication. The ball sharing. We did a good job. That's the way it's supposed to be. We're supposed to play that way all the time."

That type of performance and identity was missing in recent weeks as Memphis lost not only lost four of its previous six, but its long-time hold on the second seed in the Western Conference. With the win and Houston's 110-98 loss at San Antonio, the Grizzlies moved into a tie with the Rockets.

"The last 10 to 12 days, we've had a lot of good days," Memphis coach Dave Joerger said, while noting the Grizzlies played well in a win over Oklahoma City on Friday, then lost to Washington the following night. "We've had more good days than bad days."

Beno Udrih finished with 14 points for Memphis while Vince Carter and Mike Conley had 10 each.

As Memphis was relishing its return to the second seed, the game was a turnaround from Tuesday night when the Pelicans beat Golden State 103-100 to move into the conference's last playoff spot.

Anthony Davis scored 12 points for the Pelicans against Memphis as New Orleans dropped back into a tie with the Thunder for the eighth spot. Quincy Pondexter had 11 points, and Tyreke Evans scored 10.

"They played with a great deal of desperation, and we looked a bit tired," Pelicans coach Monty Williams said about the Grizzlies. "Once I saw the defence in the third quarter, I knew our guys were just tired."

The game already was heading the wrong direction for New Orleans before that. Memphis had taken a 55-36 lead at the half after outscoring New Orleans 28-12 in the second as the Pelicans converted only five of their 23 shots.

The Grizzlies maintained the intensity, leading by 29 in the third and eventually 40 points in the fourth.

Memphis outrebounded the Pelicans 52-39, held a 58-36 advantage in the paint and shot 51 per cent compared to 35 per cent for New Orleans.

"They dominated us down low," New Orleans guard Eric Gordon said. "When you're not making shots, and you're letting them score, that's definitely not good."

While Gasol said the key is for Memphis to build on the win with consistency, the runaway victory was enough for fans to forget the team's recent trials.

"We're not going to make shots every night," Randolph said, "but if we play hard and come out with this same energy, we give ourselves a chance for a win."

Pelicans: New Orleans had won six of the last eight games in the series. ... Davis had averaged 19 points and 9.3 rebounds in previous three games against Memphis this season. ... The Pelicans previous largest loss was 107-72 to Chicago on Feb. 7.

Grizzlies: Conley set a new career record with his 107th 3-pointer in the second quarter. ... The Grizzlies had 18 rebounds in the second period, tying a season-high for rebounds in a quarter. .The 40-point lead in the fourth marked the second time in team history the Grizzlies led by at least 40 points. The previous time was Dec. 13, 2003, when they led the then-New Jersey Nets by 48.

FATIGUE FACTOR: Several Pelicans mentioned the emotional win over Golden State on Tuesday for their play. "I thought we would have some letdown, but not this much," Williams said. Davis added: "We put a lot into (the Golden State) game, but that would be a cop out to say that's why we played like we did."