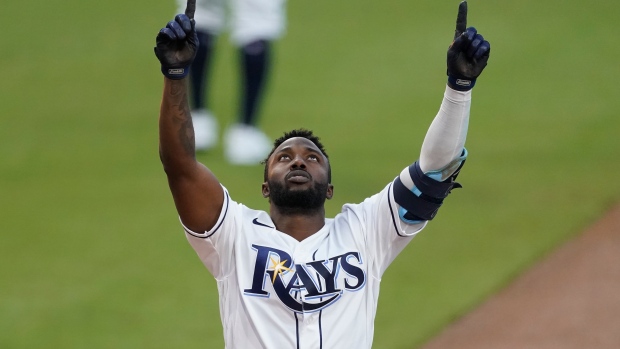 Who is Randy Arozarena? Where did he come from? And how is he putting together one of the best postseasons in recent memory? If you’ve asked any of those questions over the last couple of weeks, you aren’t alone.

It’s rare that hitters get as hot as Arozarena in the playoffs against top-tier pitching. But it’s virtually unheard of coming from relative obscurity. With the World Series between the Tampa Bay Rays and Los Angeles Dodgers set to kick off Tuesday night, TSN.ca takes a closer look at one of the unlikeliest stars in years and how he’s come to symbolize Tampa’s success.

In 2016, the St. Louis Cardinals signed Arozarena as a 21-year-old for $1.25 million out of a Mexican minor league team called the Tijuana Toros. He tore up the High-A Florida State League in 2017 and earned a promotion to Double-A that same year. Another impressive season in 2018 split between Double and Triple-A put him in line for a Major League call-up the following year. In August, he made his debut as a 24-year-old and picked up two hits and an RBI in a 6-0 win over the Kansas City Royals. However, Arozarena didn’t have long to get used to his new surroundings.

Despite an encouraging slash line of .300/.391/.500 and an appearance on the postseason roster as a rookie, St. Louis had several other young outfielders and decided to go in a different direction. In January, Arozarena was traded to the Rays along with first baseman Jose Martinez and a supplemental first-round pick in exchange for highly touted pitching prospect Matthew Liberatore, Edgardo Rodriguez and a 2020 supplemental second-round pick.

Eager to make an impression with his new team, Arozarena’s immediate plans were upended by COVID-19. He tested positive for coronavirus and was forced to miss all of summer camp while isolating in a Florida apartment. A combination of boredom and resourcefulness had Arozarena do hundreds of pushups a day and left him notably bulkier when he was able to return to the Rays. Still, without having faced live pitching in weeks, the young outfielder didn’t make his season debut until Aug. 30. The rest, as they say, is history.

In the final 23 games of the season, Arozarena slashed .281/.382/.641 with seven home runs as he helped Tampa Bay hold off the New York Yankees for top spot in the American League East. But that was just the warmup.

Numbers like that aren’t really sustainable for anyone – let along a rookie – and yet, they got better. Heading into Game 1, the 25-year-old has seven home runs and an OPS of 1.288 in the postseason. When his two-run blast put the Rays on top 2-0 in Game 7 of the ALCS, he became just the fourth player to hit seven homers before the World Series, joining Daniel Murphy from 2015 and B.J. Upton from 2008 while sitting one behind Carlos Beltran’s record of eight set in 2004. Sure, Arozarena had an extra wild card round to do it, but he didn’t go deep in the two-game sweep of the Toronto Blue Jays, instead settling for four hits in eight at-bats. Three of his four homers came against the New York Yankees in the ALDS and the other four came as the Rays held off a historic comeback from the Houston Astros to reach their second World Series in franchise history.

"Randy Arozarena, I don't have any words to describe what he's done, what he's meant to us this postseason," manager Kevin Cash told reporters.

He is the best player on the planet, Rays teammate Kevin Kiermaier told the Tampa Bay Times. "It’s incredible.

Mike Trout might have a thing or two to say about that, but Arozarena is already in some pretty elite company. He is one home run shy of the all-time playoff record of eight held by Beltran, Barry Bonds in 2002 and Nelson Cruz in 2011. He is also just one hit shy of Derek Jeter’s rookie record of 22 in a single postseason, which isn’t exactly the worst company to be associated with as the leaves turn colours.

Players like Arozarena are typical of Tampa Bay’s success. The Rays have never been an organization to spend big, so they force themselves to find talent outside of the top tier free agent market.

In fact, they’re almost the antithesis of the Dodgers. L.A. flexes their muscles when it comes to talent acquisition, while the Rays scour the bargain bin, proof there is more than one route to reach the same destination come October.

Mike Brosseau and Nick Anderson were both undrafted while Ji-Man Choi is on his sixth MLB team. All three have played key roles in getting the Rays to the Fall Classic. They’ve also made several timely trades, receiving Tyler Glasnow and Austin Meadows from the Pittsburgh Pirates in exchange for Chris Archer and Ryan Yarbrough and Mallex Smith from the Seattle Mariners for Drew Smyly. They then sent Smith back to the Mariners in a deal for catcher Mike Zunino, who has four home runs so far this postseason including a critical solo shot in Game 7. Willy Adames, Joey Wendle, Yandy Diaz, Hunter Renfroe and Peter Fairbanks also all came via trades.

Tampa might not always sign the best free agents, but they find a way to get the right players. Fifteen players on Tampa Bay’s 28-man roster were acquired via trade, while an additional eight came through the draft or international free agency.

"You sit here and look at this group of guys, and I always say we don’t have a lot of household names, but at the same time, people are making a name for themselves right now," Kiermaier told reporters.

Game 1 goes Tuesday night from Globe Life Field in Arlington, Texas, with Clayton Kershaw getting the ball for L.A. and Glasnow toeing the rubber for the Rays.