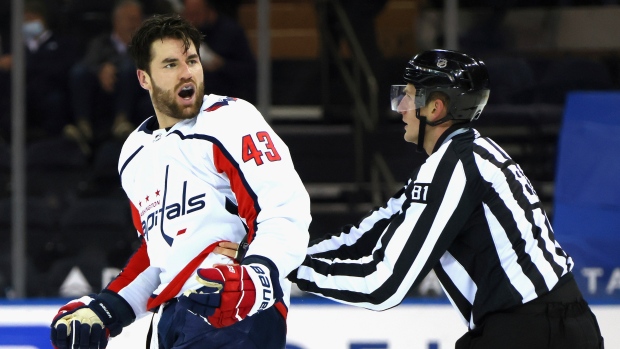 When you strip away the social media shouting, including the New York Rangers’ statement released on Twitter Tuesday night calling for the firing of NHL Department of Player Safety head George Parros, what we learned about Tom Wilson as a result of Monday’s melee at Madison Square Garden could be distilled to a pair of indelible images.

The first: Wilson mockingly flexing in the penalty box after injuring Artemi Panarin.

The message was clear. Throw out the stories about Wilson changing his game and rehabilitating his image as hockey’s human predator missile. Wilson’s Incredible Hulk impression told everyone that he’s a player with no interest in backing off a line he has historically straddled.

The second: a screenshot of Washington’s since-deleted tweet from the club’s official account which said “@Capitals chooses Violence,” along with a graphic of Wilson intimating that he lives in opponent’s heads’ “rent free." 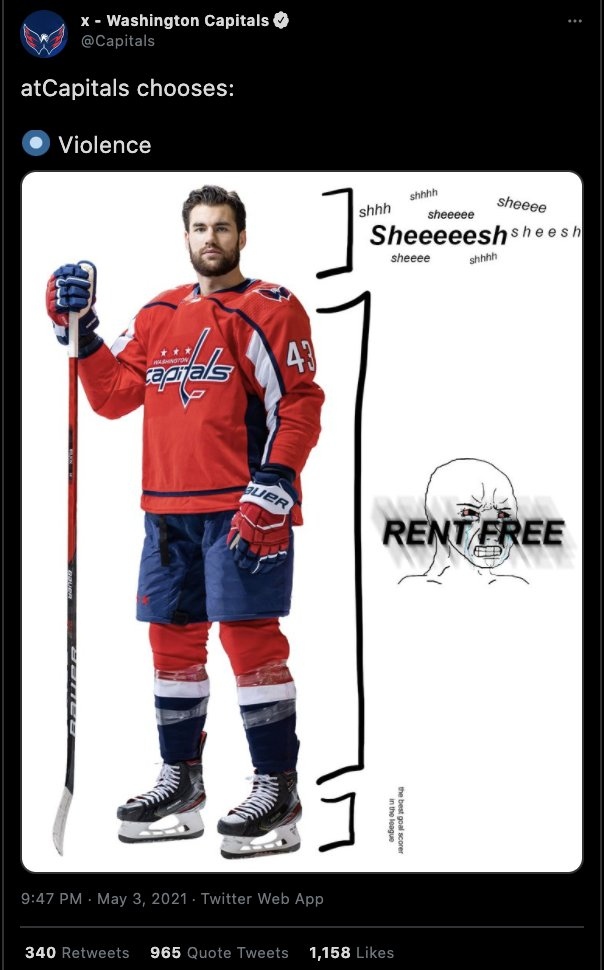 On Tuesday night, the Rangers fired back with a public statement, leaving zero doubt as to their stance on the subject.

Never before has the NHL’s Department of Player Safety been so pointedly targeted by a club in such a manner.

"The New York Rangers are extremely disappointed that Capitals forward Tom Wilson was not suspended for his horrifying act of violence last night at Madison Square Garden. Wilson is a repeat offender with a long history of these type of acts and we find it shocking that the NHL and their Department of Player Safety failed to take the appropriate action and suspend him indefinitely. Wilson’s dangerous and reckless actions caused an injury to Artemi Panarin that will prevent him from playing again this season.

“We view this as a dereliction of duty by NHL Head of Player Safety, George Parros, and believe he is unfit to continue in his current role."

A Capitals spokesperson said the team will not be responding to the Rangers' statement, according to the Washington Post.

The Capitals took down their tweet, but their actions and words offered full-throated support for Wilson that was already apparent earlier that night.

After 14 minutes in the penalty box, including a 10-minute misconduct and two minor roughing penalties for manhandling Panarin and punching Pavel Buchnevich, Wilson skated a regular shift in the third period – scoring an empty net goal to add insult into injury.

Coach Peter Laviolette said post-game: “I thought it was just a scrum. Some physical play … it happens a lot.”

Laviolette let slip a golden opportunity to send a message that antics that hurt the team won’t be tolerated. Laviolette scratched Evgeny Kuznetsov and Ilya Samsonov for Monday's game reportedly for being late for a team function. Wilson has been suspended five times for a total of 28 games during his controversial career.

On Tuesday, the Department of Player Safety opted to not suspend Wilson for a sixth time, instead fining him $5,000 – the maximum allowed under the Collective Bargaining Agreement – for roughing Buchnevich. There was no supplemental discipline for his takedown of Panarin, who will miss the final three games of the season as a result of the injury he sustained in the ugly episode.

Wilson has now forfeited $1,296,456.50 in salary to the NHL’s Emergency Assistance Fund as a result of supplemental discipline, all over the last four calendar years.

Rangers forward Ryan Strome told reporters Tuesday: “I think it’s a joke, to be honest with you … I think it sends a bad message, in my opinion. I think everyone pretty much agrees with that. And I just think that the league missed one here big time … As players, you want the league to have your back in those situations, and I think a lot of guys in our dressing room just feel like they didn’t.”

“A line was crossed,” Rangers coach David Quinn said. “Guy didn’t have his helmet on, vulnerable, he got hurt. To me, it was an awful lot there to suspend him.”

Clearly, the NHL's response was more in line with Laviolette’s take – a scrum gone bad - than the outrage heard in many quarters.

The belief is the Department of Player Safety would have had more ground to suspend Wilson if his punch landed squarely to the back of Buchnevich’s head, instead of his shoulder or neck area.

That Panarin was a willing participant in the wrestling match with Wilson – he jumped into the fray of his own volition to defend Buchnevich – was most certainly a factor. That Panarin’s helmet fell off – making the situation infinitely more dangerous – apparently didn’t factor into the decision-making.

Sources said the NHL found no evidence of Wilson pulling Panarin’s hair to initiate the takedown, as some slow-mo social media posts may have suggested. And when watched in real time, the Department of Player Safety viewed the sequence as no different than hundreds that happen throughout the course of a season.

And that is what is so confounding about how the NHL metes out justice – even as it relates to Wilson.

Two months ago, the NHL broke precedent and suspended Wilson for seven games, making him the first player in the history of the league to be banned for boarding on a hit that was not from behind.

Rather than abide by the precedent and rulebook for rationale not to suspend Wilson, the league found language that gave it an opening to suspend him.

The same opening existed on Monday. The NHL chose not to walk through it.

Now, with heat from one of the league’s most prominent and Original Six franchises, it remains to be seen whether the entire NHL justice process will be up for overhaul this off-season.