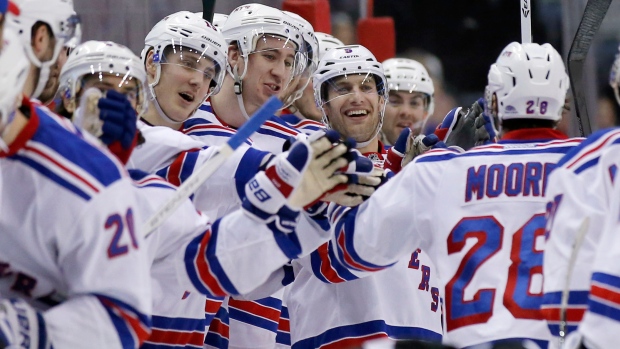 WASHINGTON - The New York Rangers completed one of their finest regular seasons in their long history Saturday. Now they say it's time to move on.

Kevin Hayes and Dominic Moore each had a goal and an assist, Henrik Lundqvist stopped 22 shots and the Rangers capped their stellar regular season with a 4-2 win over the Washington Capitals.

The Rangers (53-22-7), winners of the Presidents' Trophy as the league's top team in the regular season, set franchise records for wins and points (113) in a season.

Next up for top-seeded New York is Sidney Crosby and Pittsburgh in the first round of the post-season.

"Everything we've done, the Presidents' Trophy and everything, that's gone," Derick Brassard said. "When the buzzer sounded in the third period, everything's gone. Now we have to look forward to the playoffs."

Brassard and Jesper Fast (empty netter) also scored for the Rangers, and Martin St. Louis had two assists as New York won for the sixth time in seven games.

"Obviously we had a good year," coach Alain Vigneault said. "I'm very proud of the way we played, but now our focus shifts on the playoffs."

Lundqvist won five of his seven starts after returning from a neck injury and finished the regular season with 30 wins.

"Coming back I kind of set a personal goal to win 30 games," he said. "I knew it was going to be a challenge, but the guys played really well and I think really helped me find my game fast."

Alex Ovechkin scored his league-leading 53rd goal for Washington and Stanislav Galiev scored the first of his career.

The Capitals (45-26-11) return to the playoffs after a one-year absence. They finished second in the Metropolitan Division and will have home-ice advantage for their first-round series against the Islanders.

Braden Holtby made 30 saves for Washington while extending his team record with his 25th consecutive start. He played in 73 games this season, tying Olaf Kolzig for the team record.

New York opened the scoring at 12:36 of the first when Ryan McDonagh's shot hit Hayes, and Hayes backhanded the loose puck out of mid-air past Holtby for his 17th goal.

After Moore's backhand made it 3-0 early in the second, Ovechkin pulled Washington within two when his one-timer from his power-play home in the left circle beat Lundqvist at 6:31.

Nicklas Backstrom had an assist, pulling into the league lead and hitting the 60-assist mark for the second straight season.

Fast's empty-netter made it 4-1 before Galiev closed out the scoring.

NOTES: Ovechkin set a Capitals record with his 25th power-play score. ... The Rangers took the season series 3-1. ... St. Louis has earned at least a point in each of his past 11 games against the Capitals. ... Washington was again without forwards Eric Fehr (upper body injury), Jay Beagle (upper body) and Tom Wilson (head). ... Rangers defenceman Marc Staal (undisclosed) and forwards Rick Nash (undisclosed) and Ryan Bourque did not dress.